Attitudes have changed, not all captains acknowledge you now, there seems to be a them and us attitude with a small minority of cruisers and narrowboats. I don't understand this behaviour because it's the variety and different styles of boats and their crews that makes the Thames so interesting.

The Thames seems a lot quieter now in that there doesn't seem to be as much traffic using the river even though the marina's still appear full. We never had to wait once for a lock the whole 4 weeks we cruised even though the weather was glorious and we cruised at weekends too. I can remember waiting for the third or fourth lock through at places like Bray, Shepperton and Chertsey

The large sea going boats have increased (what recession), these are the "more money than sense" brigade that have a  couple of massive over horse powered engines under the deck of a beautiful cruiser, the engines being ruined by always running on tickover, moving from a marina or home to their favourite spot to show off on sunny weekends.

Speeding appears to be the norm, what happened to 'a brisk walking pace', 'make no wash' or 4 miles an hour to prevent the erosion of the river banks? I only saw one Inspector's launch and that was in Dukes Cut, I used to see these launches out often stopping speeding  vessels and checking licences. The environment Agency's rules of navigation are here. 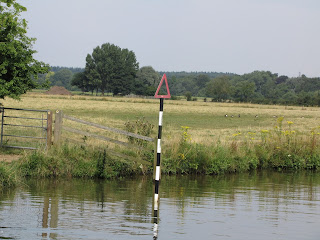 These markers used to be at various places along the Thames you timed yourself from one marker to the next and if you travelled the distance in less than a minute you were speeding and needed to slow down. This was the only one I noticed and its other 3 markers were missing click here

Square signs in kilometres when did that change? I'm not on the Rhine or the Seine it's the Thames and it's still in England. It was probably some pathetic EU directive with a cash inducement to the Environment Agency that got that one in, must be why so many boats seem to be speeding, they can't convert KPH into the unit of measurement they understand, the signage might as well be in nanometers, smoots or handbreadths.


The Thames isn't as manicured as it used to be, not all bad as we saw in some place's plenty of water lilies at the waters edge and we don't remember seeing this plant before on the Thames. Some parts of the reaches are very overgrown and huge branches just left where they have fallen this has left  fewer mooring spots especially in the more rural areas. Also lots of buoys marking underwater obstructions especially above Osney, the EA of old would have employees out to remove the obstruction not just mark them or at least have them removed by the start of the cruising season.

Seems like every Tom, Dick,  Harry or Uri Geller  wants a mooring fee, it is understandable where the bank has been kept to a decent standard with rubbish disposal contractors employed like Windsor or Henley town centre's but a lot of others are just chancer's with no thought for the comfort or safety of the boater.

These are only our personal thoughts in the moments we spent here,we had an enjoyable time on the Thames and like the canals there is still a place there for romantics and eccentrics to enjoy England away from the city,towns and traffic of the 21st century.