When we wake we sometimes play the "guess what time it is" game, there isn't a timepiece in the bedroom as we we have no need for one, this morning neither of us guessed anywhere near our 10 o'clock rise. 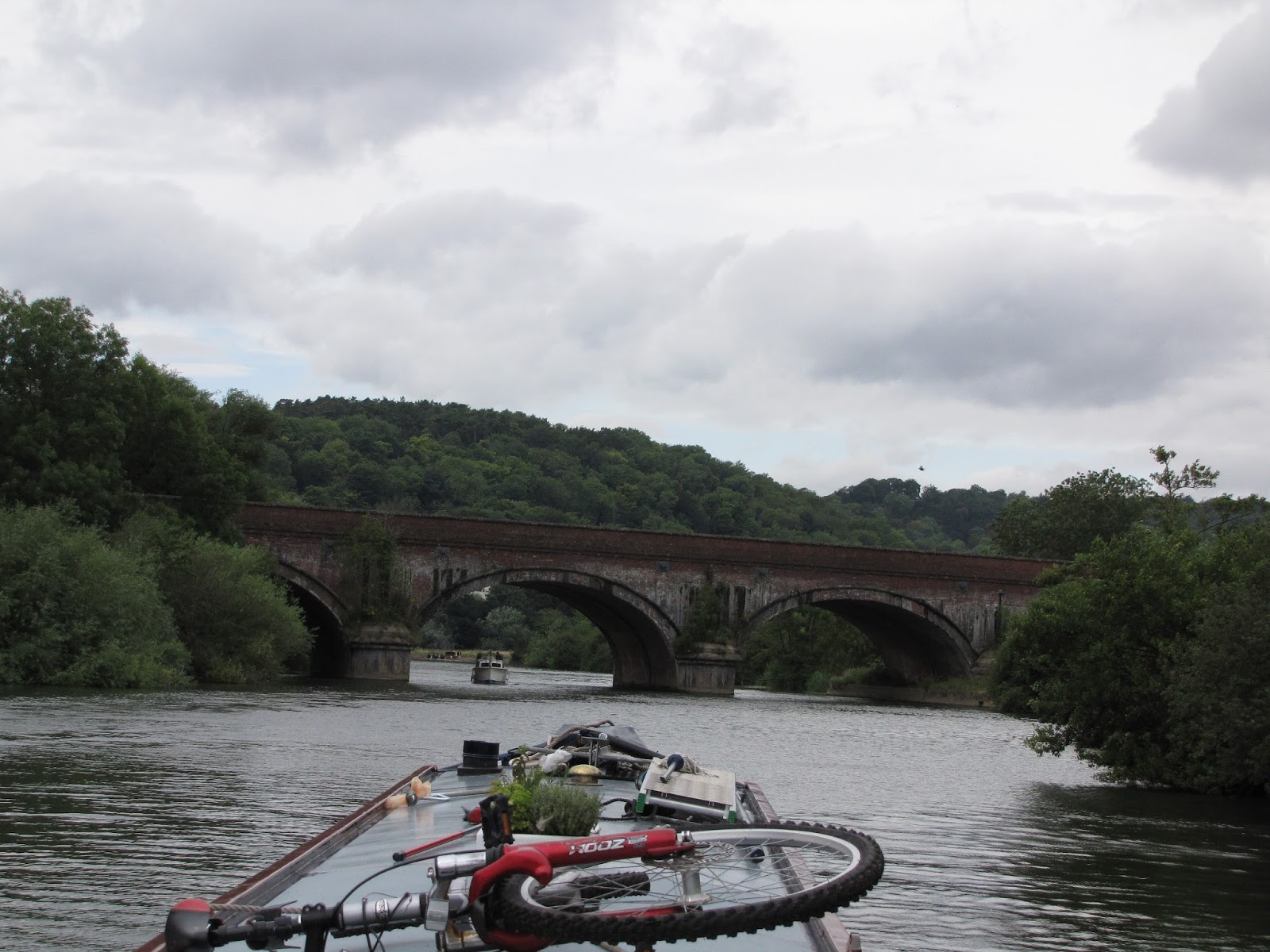 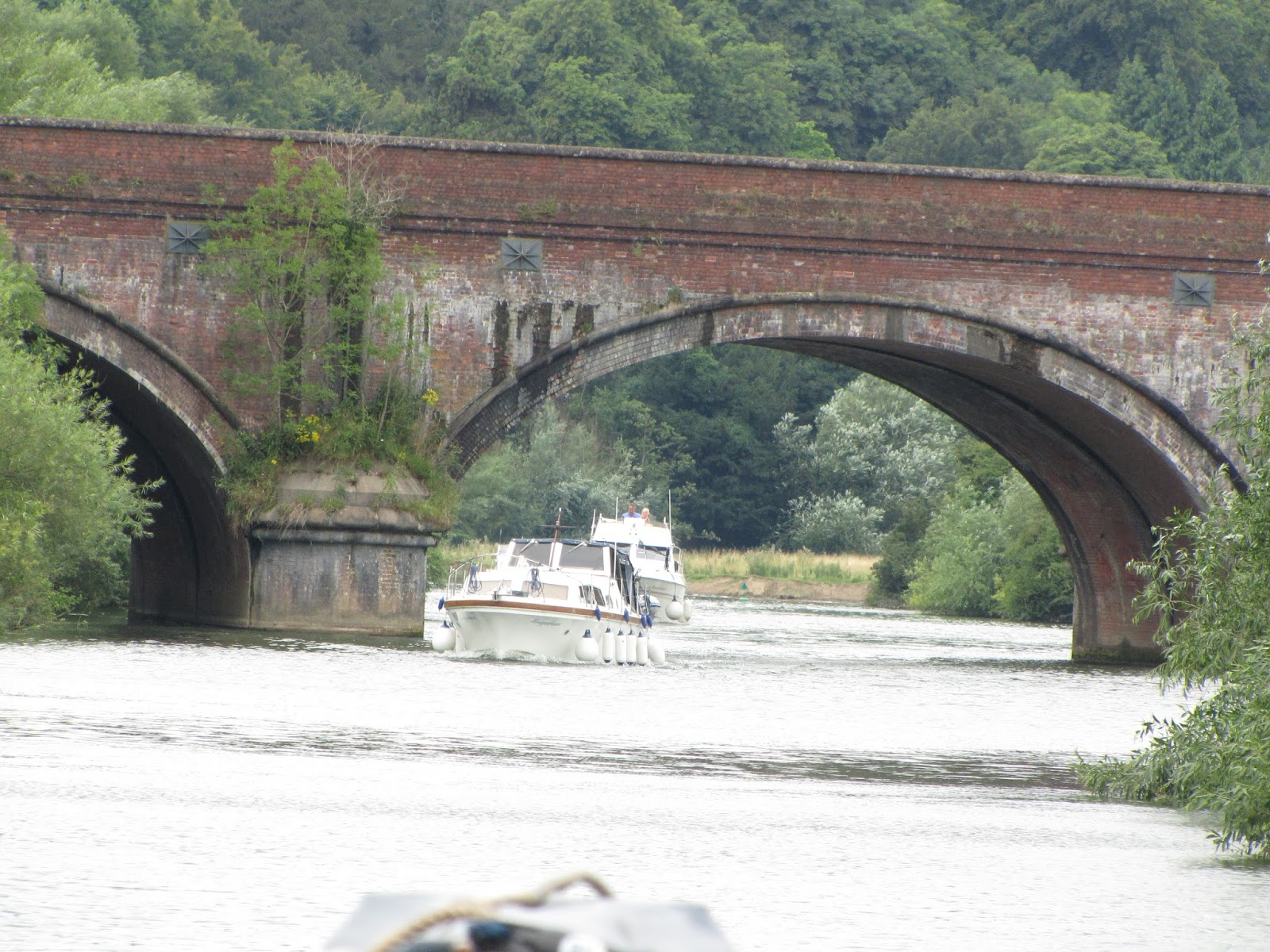 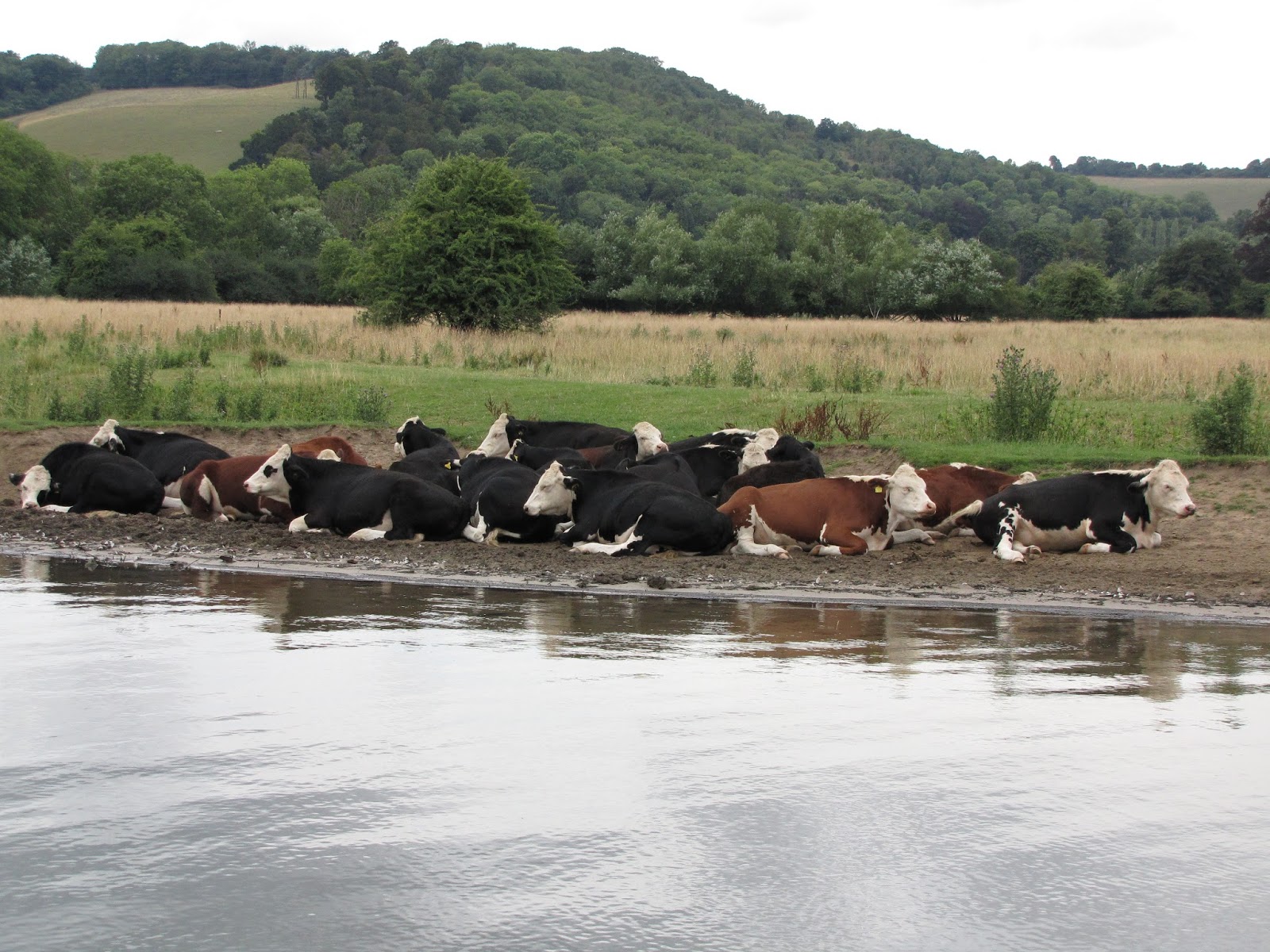 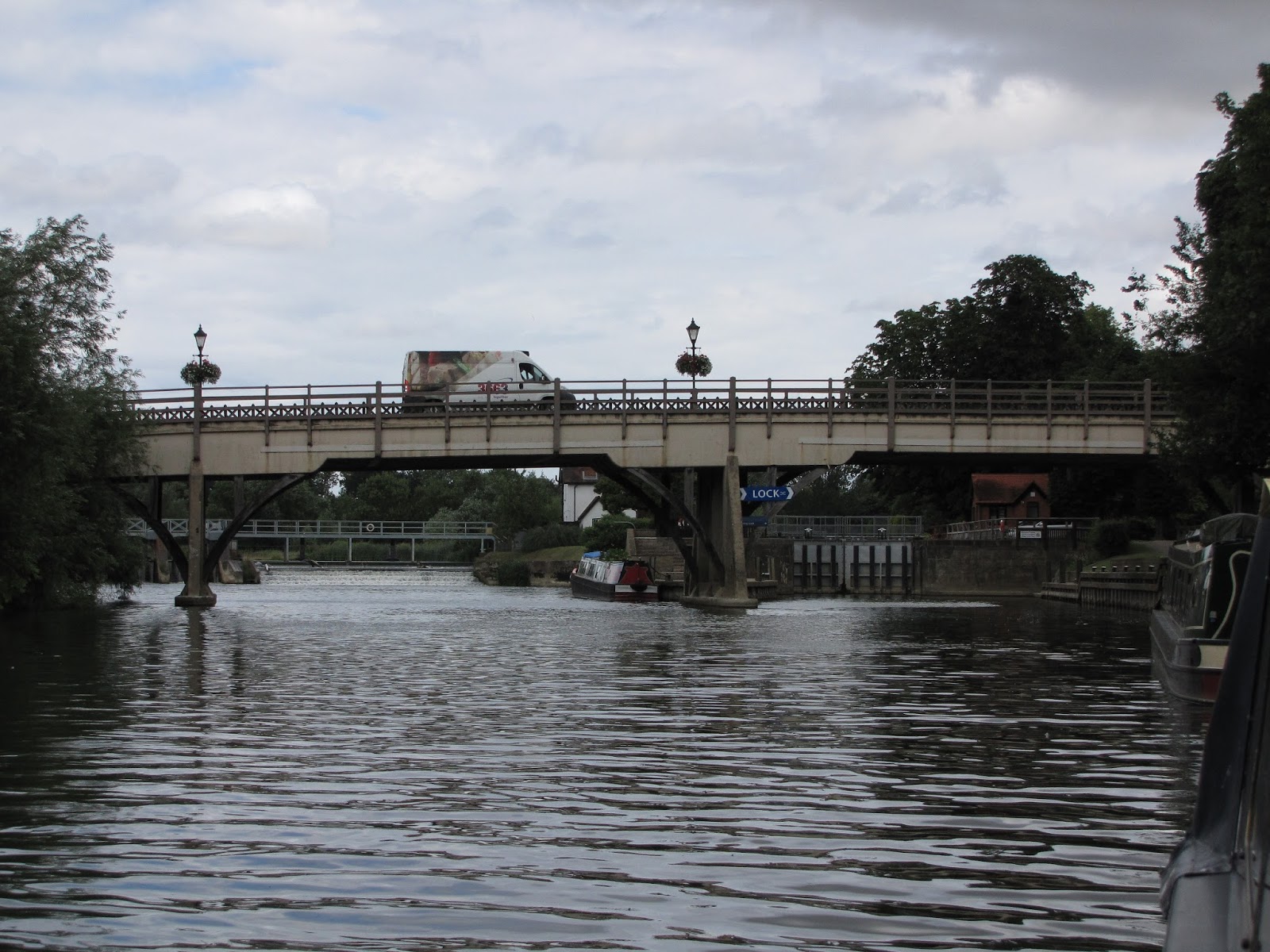 Goring Bridge with the lock gates visible under the starboard span.

We cruised for an hour, didn't use any locks and are now moored in Goring at 1230hrs.

These moorings are very popular, so not much space for a hire crew trying to moor a 60ft boat in a 58ft gap in front of Festina, I rushed out to help them and by moving Festina back 2ft so she was button to button with the boat behind we squeezed the grateful crew and boat in front. Wish we hadn't bothered now as Anglo Welsh has sent them out in a boat that doesn't charge it's battery's too well,  the skipper informed me that he has to run the engine for at least 10 hours a day to get any power into the batteries. He has had engineers out from base but they couldn't do anything about the power but they did manage to fix the aerial to the TV which had apparently been wired wrong. Now the cynic in me might say that Anglo Welsh knew the batteries were on the way out so they disabled the aerial as the TV is a big consumer of power and without using it the hirer's wouldn't need to run the engine so long. It's obvious it needs a new battery bank or/and  alternator. Not the holiday makers fault but his engine is now 6ft from our saloon and our peaceful day is shattered, funny thing is his saloon is 40 feet away from the engine and he won't hear it.

Forgot to mention on yesterday's blog so I'll mention it today, we saw a Mink swimming across the river to an island and scamper of into the undergrowth. I wasn't quick enough to capture it on the digital but I did manage to capture a Kingfisher illegally fishing at a lock landing. 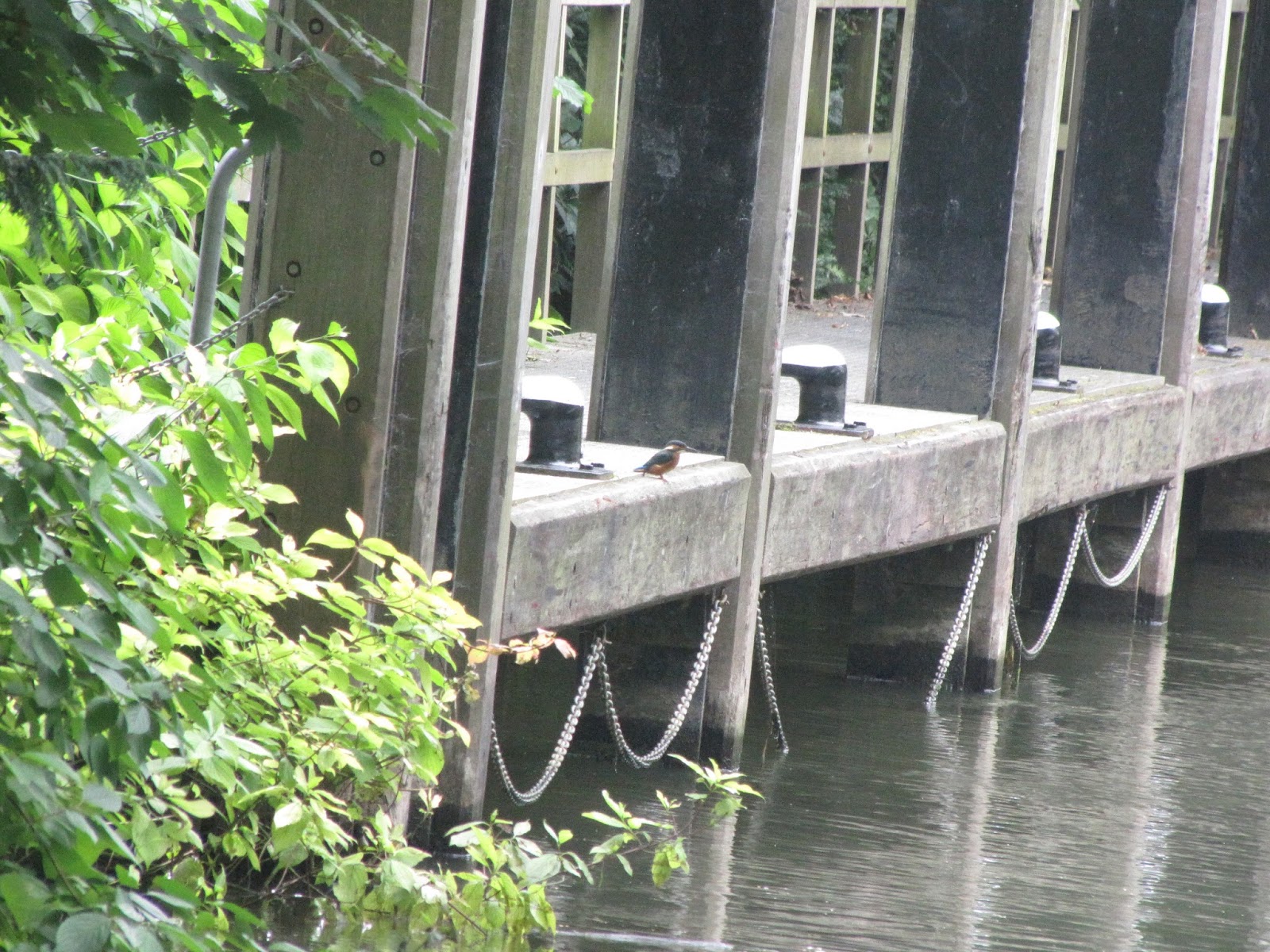 Not a very clear shot but these little birds are ever so hard to photo.

I'm writing this while it is pouring with rain but the sky is bright so hopefully it will pass, we want to explore Goring and I read in the Independent the other day a pint of real ale is so good for you, it helps ward off all sorts of ailments so we may frequent one of Goring's four fine Inns.

We did in fact go to the John Barleycorn where we bumped into the hire boaters we had help moor earlier and they insisted on buying us a drink, water for Sue and  Brakspear Ale for me.