Sunday - the Ocado order arrived, a bit late at eleven o'clock but the driver did ring to let us know he was stuck in traffic.

We found ourselves in the Kings Head in Shepperton square courtesy of Glyn & Christine who collected us by car from Pryford. The  pub has changed from all recognition and not all for the better in my opinion, changing from a busy low beamed dark cosy boozer, into an empty open planned airy bright gastro pub.

We were here to watch the rugby along with half a dozen locals, Roly was happy when his team started well and led at half time, helped by Ford not turning up with his kicking boots. The second half belonged to England and they won by 27-13. 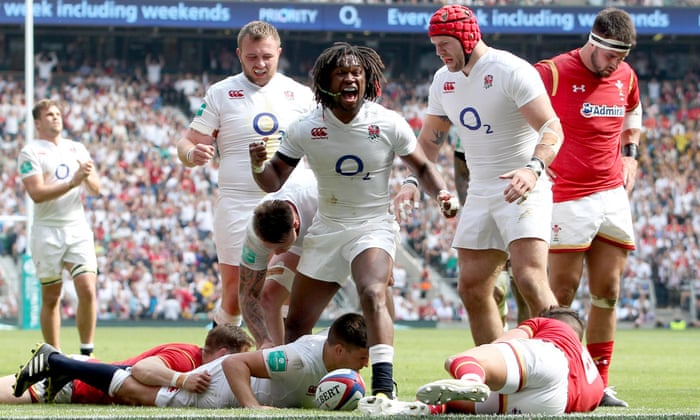 Monday - Our weeks' license for the river Wey has expired, we needed to be at Thames lock for the first lock through at 09:00, so it was an early start at 07:00.

It was a cold morning as we cruised through the countryside spotting deer with fawn, kingfishers, rabbits and squirrels along with the usual water birds. What we didn't see was any cars, but at New Bridge we are hit by a crescendo of traffic sound from the M25 which diminishes into the background by New Haw lock.

FL & Klara arrived at Thames lock at 08:59, returned the borrowed windlasses and were locked through. There was a spot on the Weybridge bank by the rowing club so we breasted up for the rest of the bank holiday, the locks should be quieter tomorrow. Now at this spot you have to ring the Shepperton lock keeper to notify him of your arrival, free for 24 hours, a charge there after or a fine for non compliance. 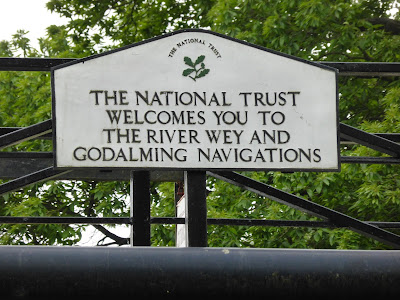 Friday - Early start today as rain was expected at noon, although sunny a chill to the air meant we had our fleeces on as we started the return trip back to the Thames.

We enjoy the Wey burbling through a green belt of some of Surrey's finest landscape, so glad the National Trust looks after this waterway, you wont find any shoddy developments here. Of course the M25 & a few busy A roads can be heard from time to time along it's length but mostly it is bird song that can be heard.

Tonight the three crews will meet up at The Anchor for a last supper we have had some good tow path banter and beer on this trip but now Richard & Linda are heading off across the channel - even boaters need a holiday.

Sunday we will try and find somewhere to watch the England v Wales rugby game. Roly & Bev being from the 'valleys' will be in good voice and trying to drown out any rendition of Swing Low. 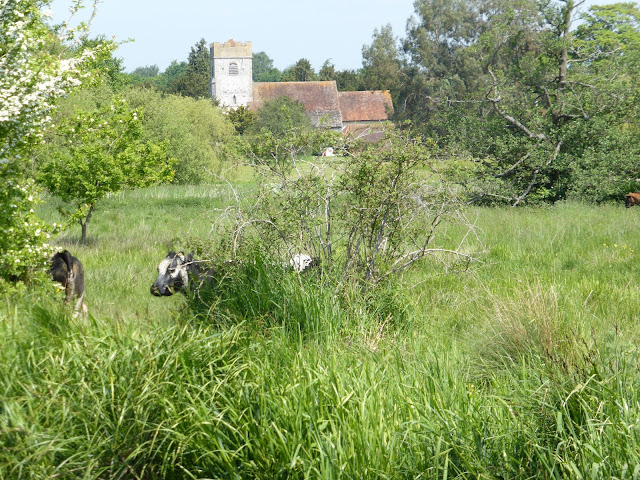 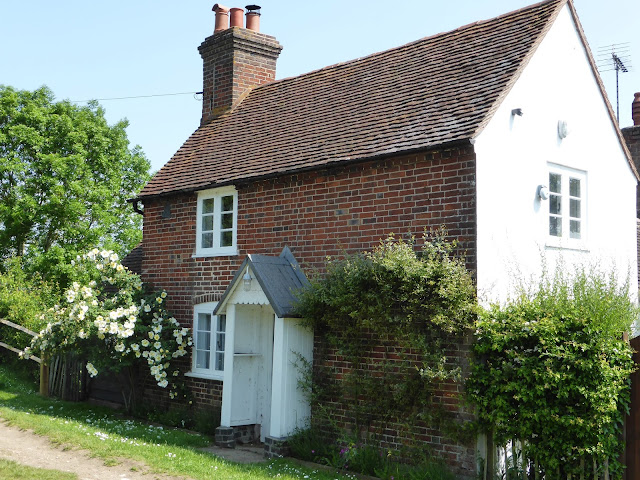 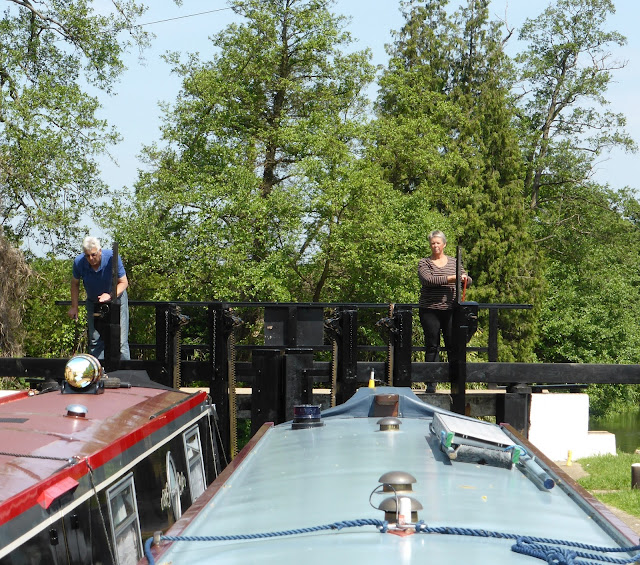 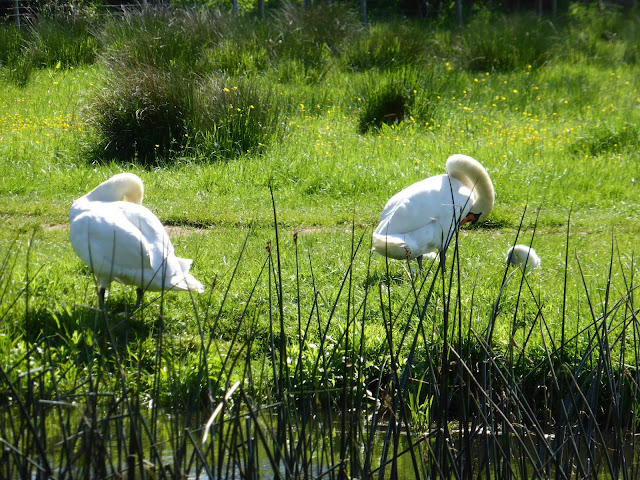 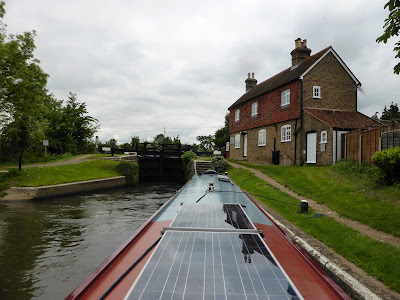 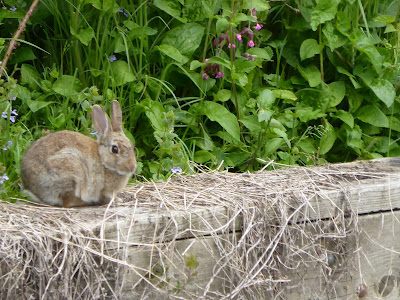 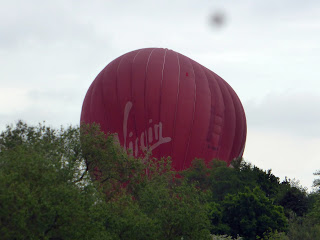 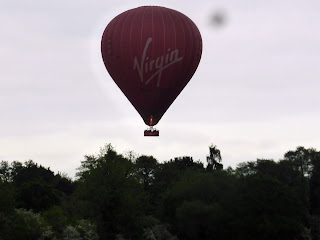 We have had a great cruise but a rather chilly one, we moored up just south of Guildford. The bankside chairs came out and we had a lovely late afternoon chin-wagging with Richard, Linda, Bev & Roly until light rain sent us back inside. Later the Webasto was ignited for an hour just to keep the chill away.
Posted by Andy at 13:55 No comments:

There's a handy water point at the holding pound, Klara filled her tank from it while we waited for the lock keeper to arrive for work and let the boats through Thames lock and onto the River Wey.

Lock keeper was on time at 09:00, we paid our fee, the Wey is managed by the National Trusts, as card holders we get a 10% discount.

Leaving Thames lock the cruise passes through smart urbanisation's that are Weybridge & New Haw under the artistically spray painted pillars( I hate graffiti but this stuff was better than most)  holding up the eight laned M25. Once we are beneath Murray's bridge the landscape is open meadow and woodland's.

I get into a tranquil mood almost entering into a trance by the water, greenery, sunshine & shadows. The spell is dramatically broken beneath a bridge when FL's bows met the opposing bows of a tooting narrowboat. I slam the gearbox into reverse but the prop didn't bite in time for the bows not to kiss. All boaters can tell that you can cruise for hours and the only other boat coming down the line will be met at a blind bridge. 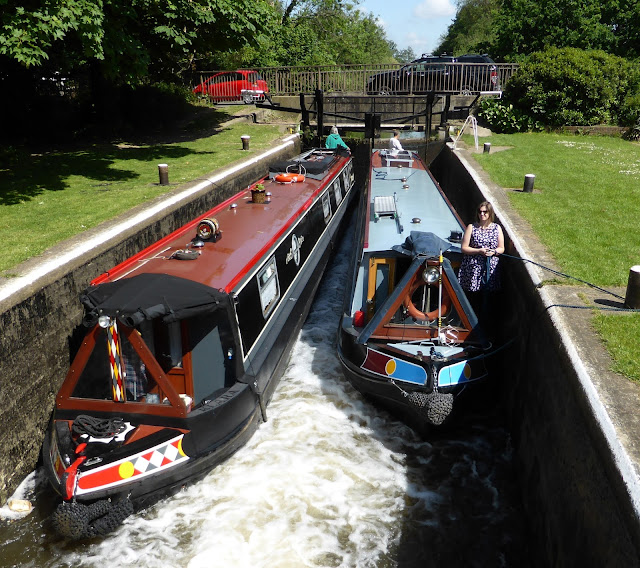 We moored up at The Anchor in Pyrford to meet up for dinner with two of my brothers, sister in law & Daisy the dog. Later Nikita's bags were loaded into Mike's car for the journey to Gatwick.
Posted by Andy at 01:04 No comments:

We have now shuffled along the river to Shepperton where we are meeting friends & family. We are also off to Twickenham for the final round of the Rugby 7's International competition.

Our first visit to Twickenham together was to the Middlesex 7's over 30 year's ago,then we sat on wooden benches in the open, the stadium has transformed over the years to a first class venue. 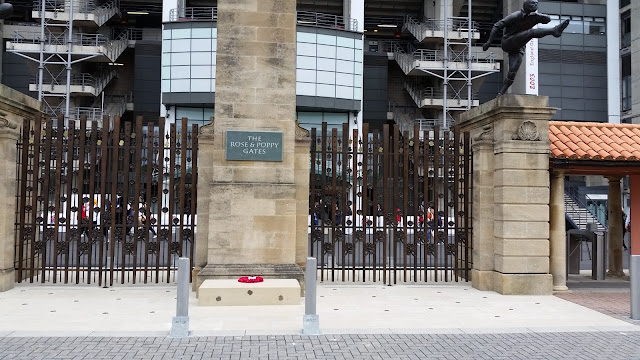 England had a good day on Saturday winning all three games in their pool which included Fiji, Wales & Australia. Today they were thrashed by New Zealand and Scotland

Best match of the weekend was the last match of the tournament, the cup final between Scotland & South Africa was fantastic with Scotland getting a try in the last seconds of the game to win 27-26.


Tomorrow we move on to the River Wey.

Wednesday- Not the best weather to wake up to, Richard & Linda and pooch Muffin stopped by for a coffee, while we chatted the sky's brightened a little. A decision was made to move along river through one lock and onto the island moorings in Windsor.

Thursday - We went with Bev & Roly to The King & Castle for breakfast before taking up a position on the road outside the castle to watch the changing of the guards. 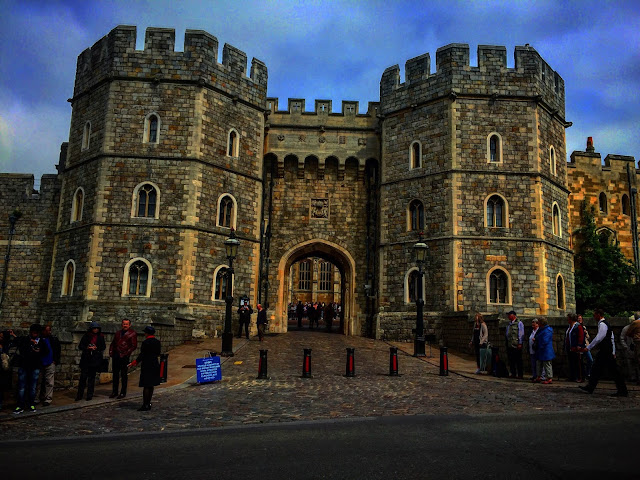 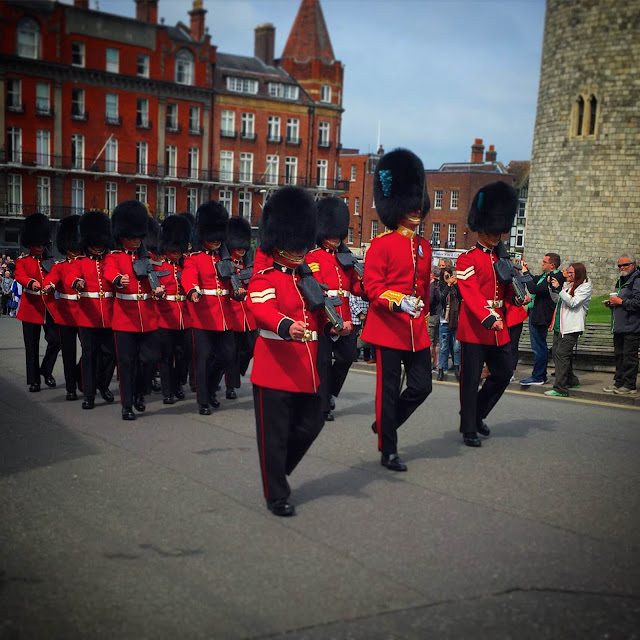 
Through Cookham lock the river to port is steep and wooded with Cliveden House peeping over the canopy of leaves. 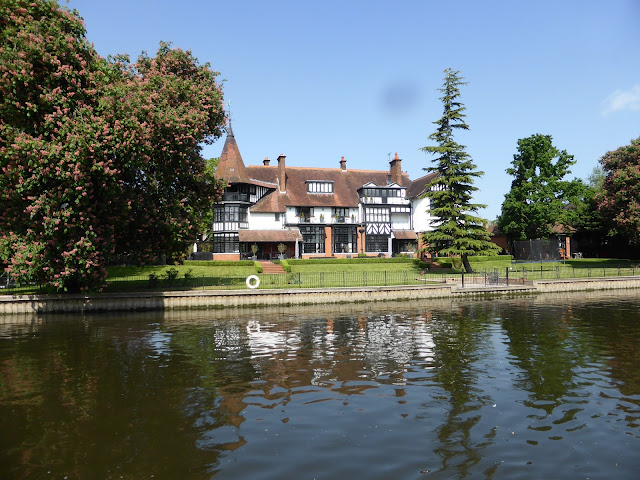 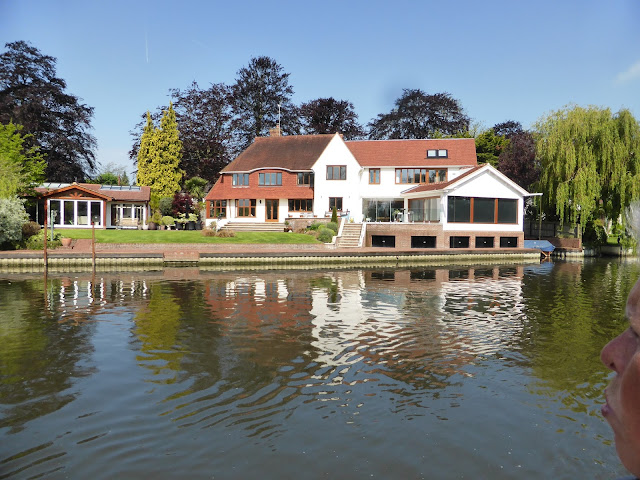 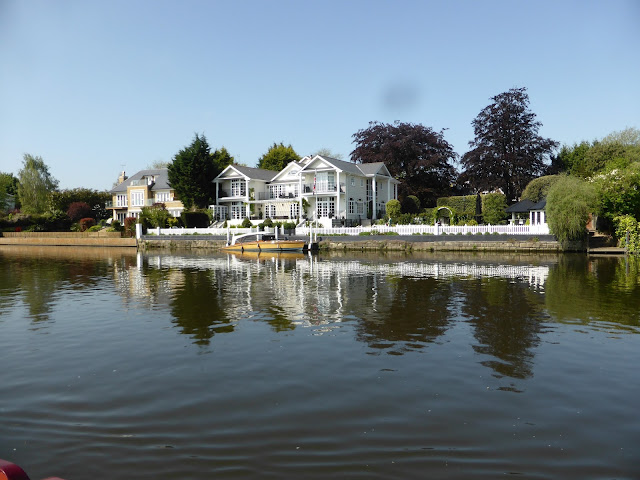 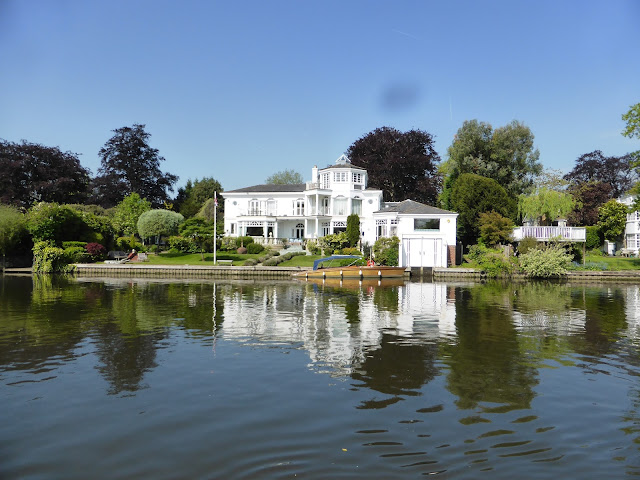 We moored adjacent to Dorney Lakes, the bankside chairs came out, drinks and towpath tapas came from the two galley's. After chilling for an hour or two we had an oblong walk around the lake. there were lots of crews being coached by cyclists with megaphones.