We had lunch out with newest boaty mate's Sharon & Richard at the Radford Bank where a very good three meat carvery was had for £4.29,  less than the price of a large Big Mac value meal at McDonald's at £4.69. (I Googled it). We had a good laugh and catch up, an enjoyable way to spend a Wednesday afternoon, not spoilt by one of us forgetting to order Sue's dessert. ;)


Later I spent a some time looking through the 1000+ photos I took in 2014, along with some really bad photography there are a few good shots, the above is my favourite, FL is waiting in the cool dark damp lock for the left hand gate to be opened so we can cruise under Kings Head bridge into the bright scene beyond.

We are contemplating upgrading the loo on FL. 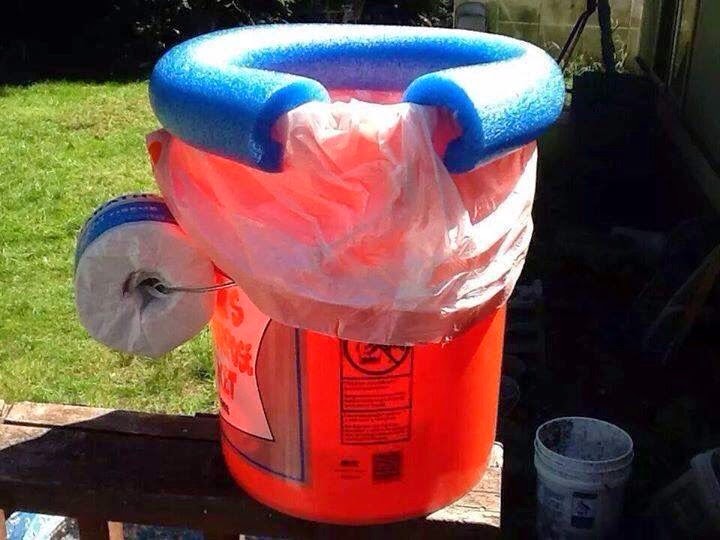 Today all the Happy Hat gang had a trip over the causeway to St. Michael's Mount 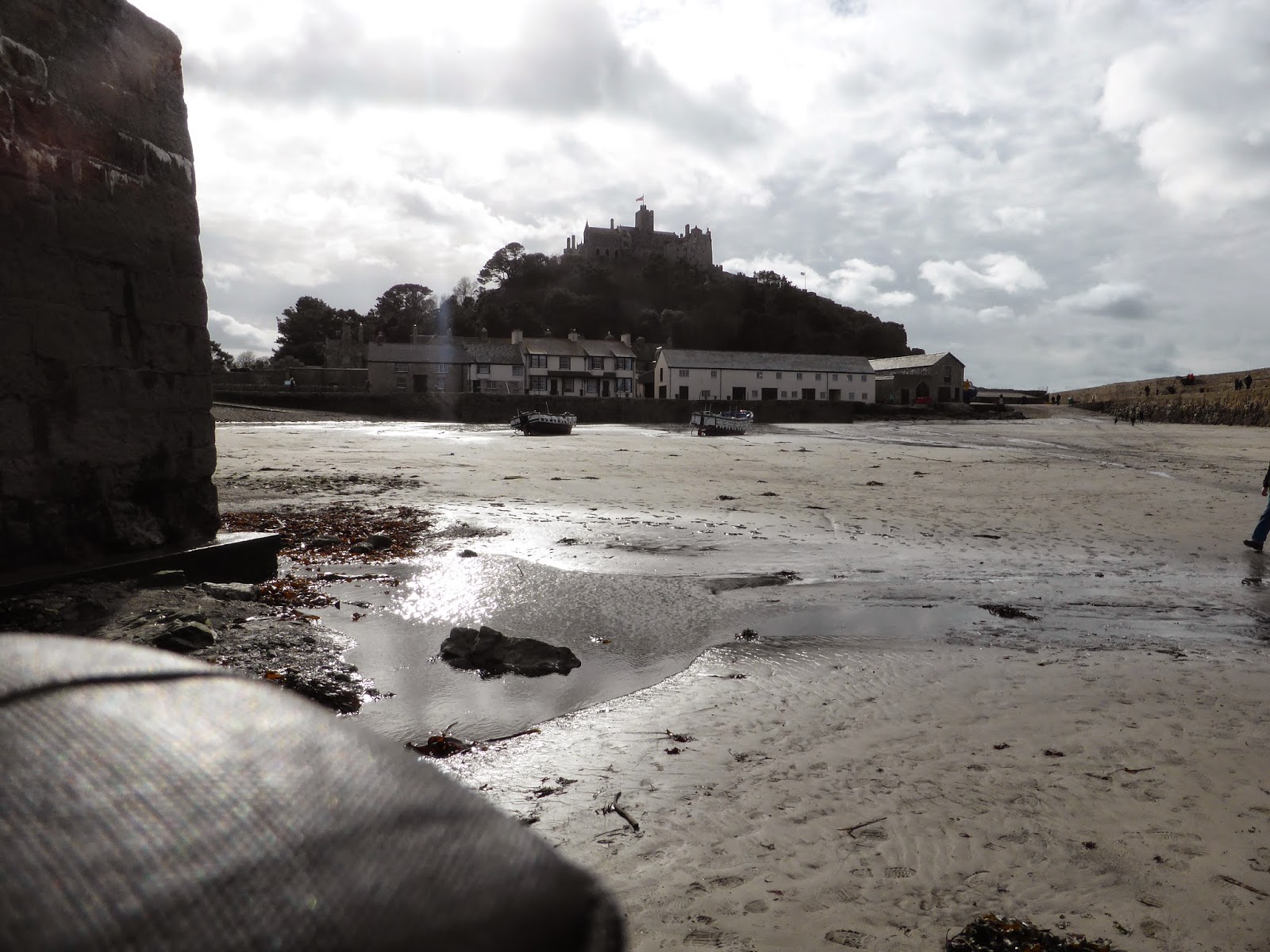 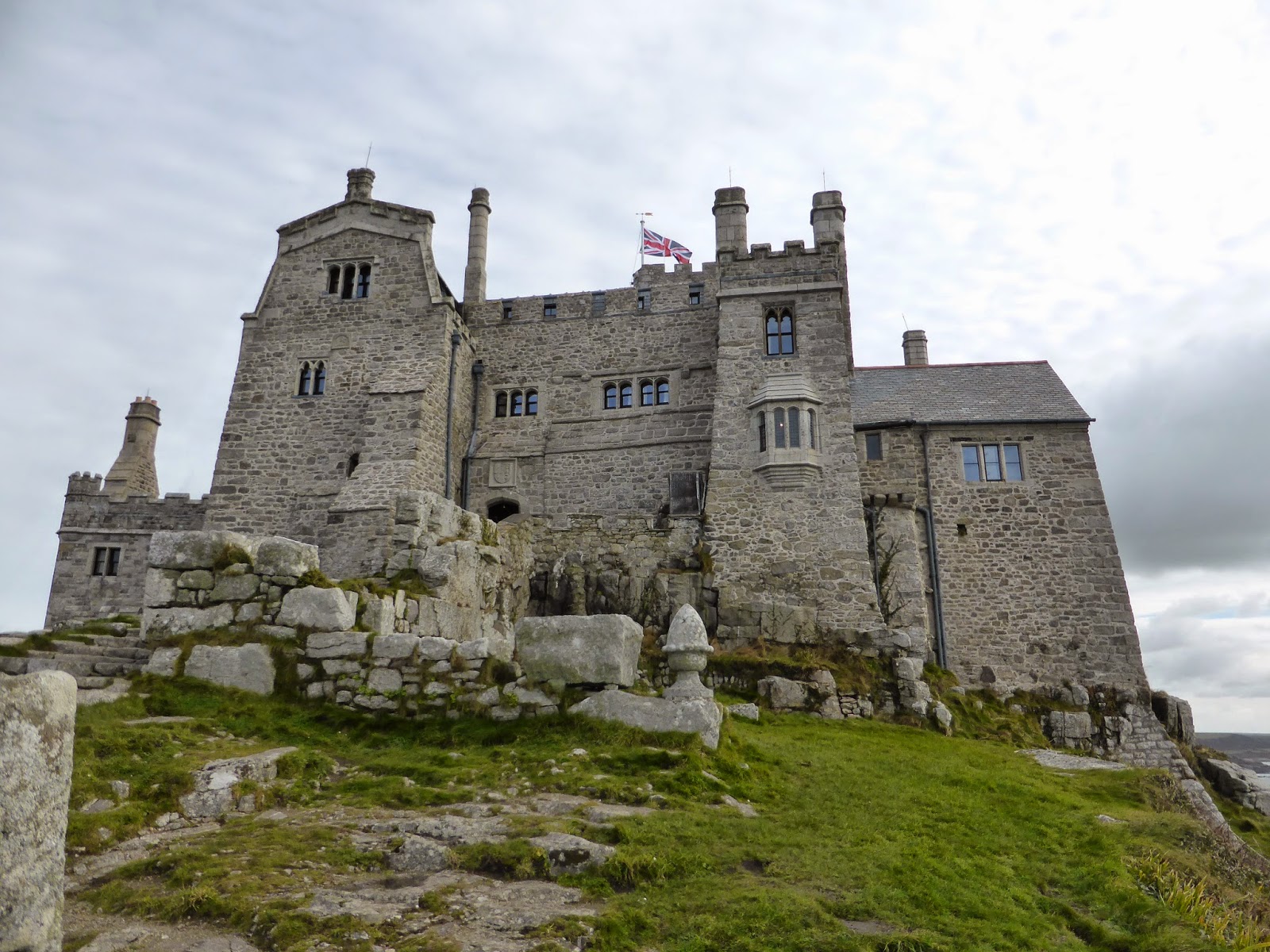 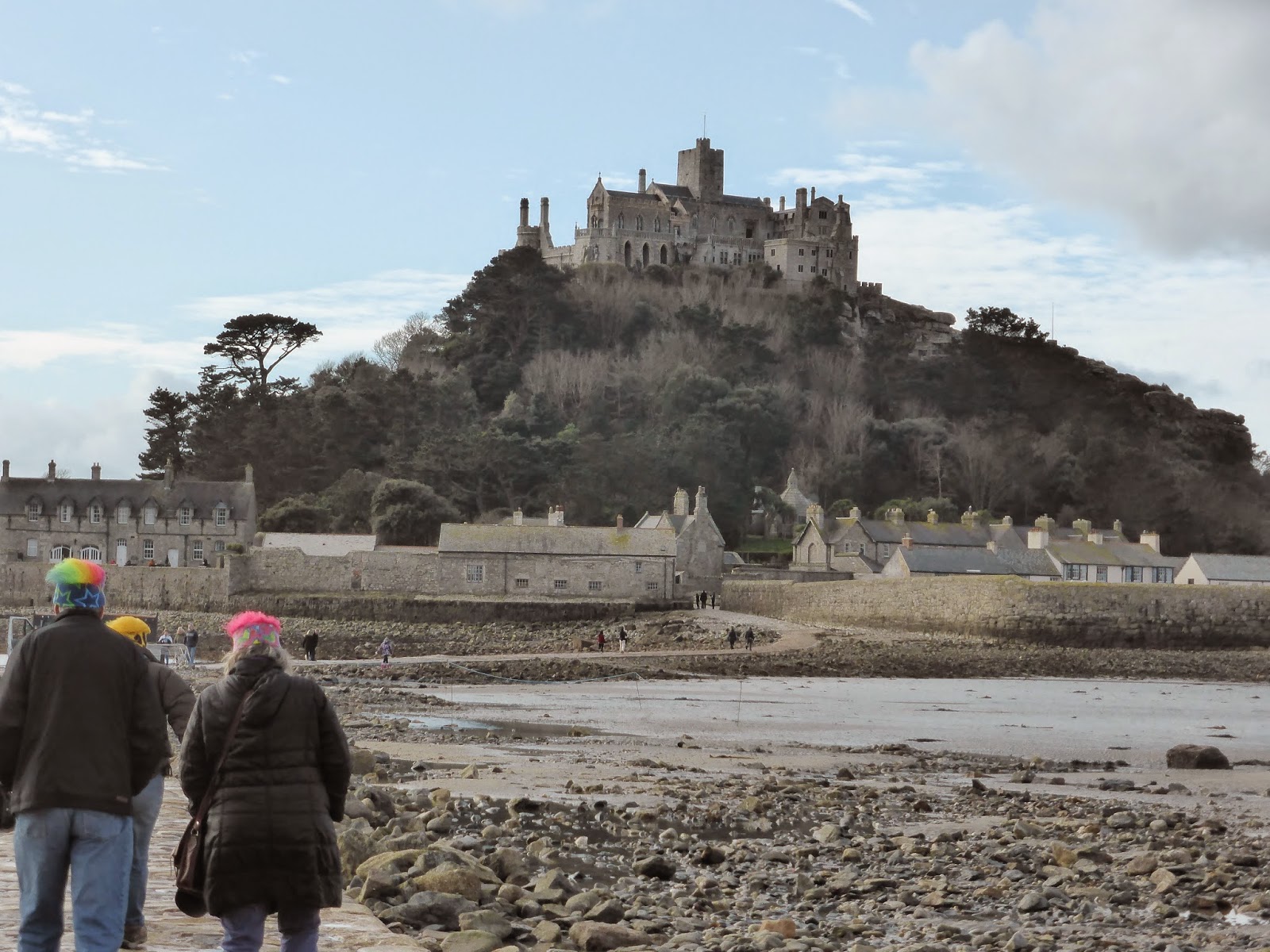 Lunch was had at the Godolphin Arms where we enjoyed seafood platters, two of our gang got very competitive during a kiddies pirate colouring competition.


Our last night in Cornwall was an evening at the Wink  with some of Dot & Gordon's friends  and drinks back at the barn.
Posted by Andy at 15:13 No comments:

We had a good day today with our Cornish tour guides Gordon & Dot, first we went to the Minack Theatre at Portcurra 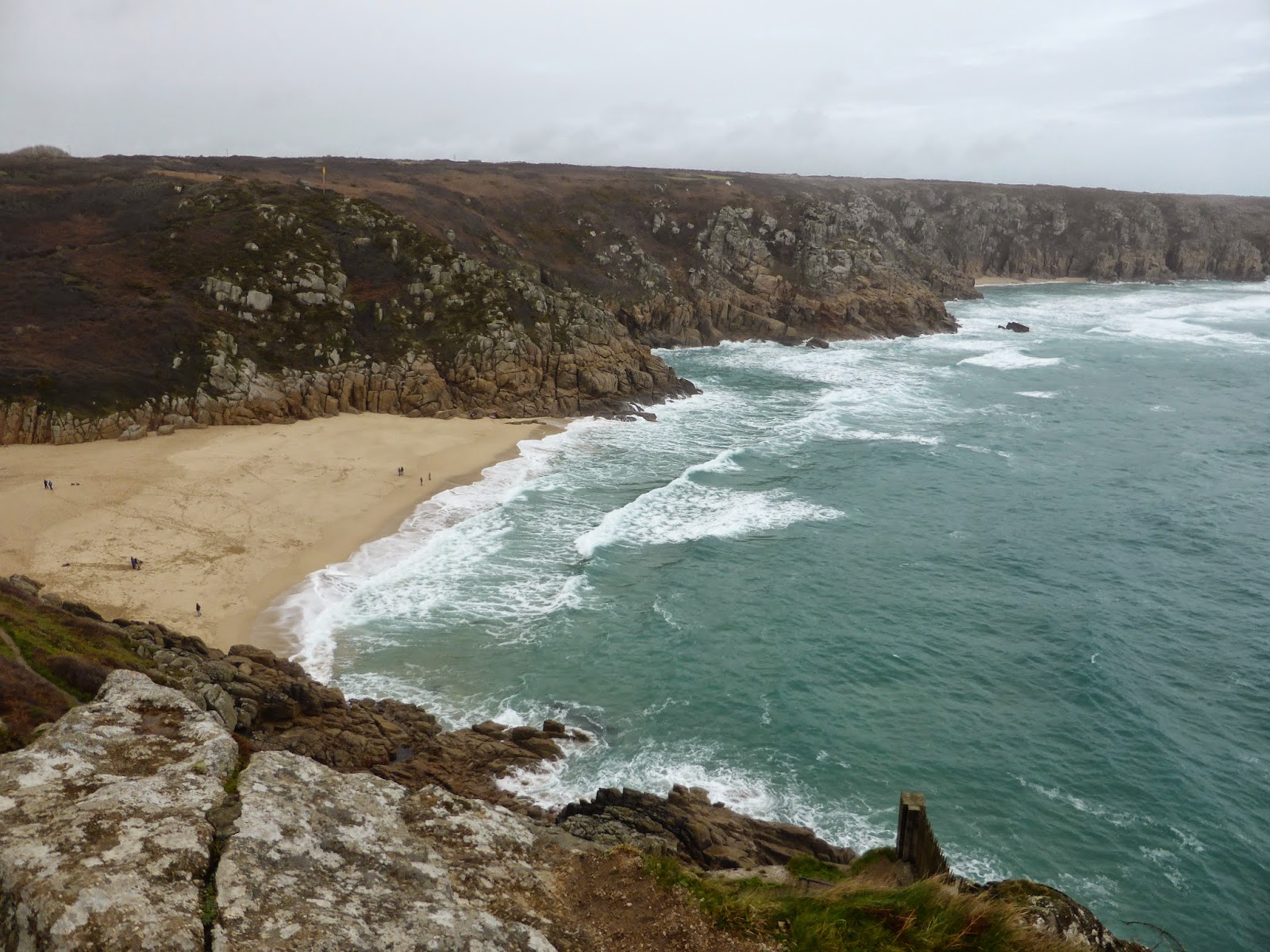 Our guides took us to Lands Ends where we met one of their friends Eddie the Pirate who has a crafts studio (a  must visit if you are ever in the area)  he regaled us with stories and entertained with some neat magic tricks. 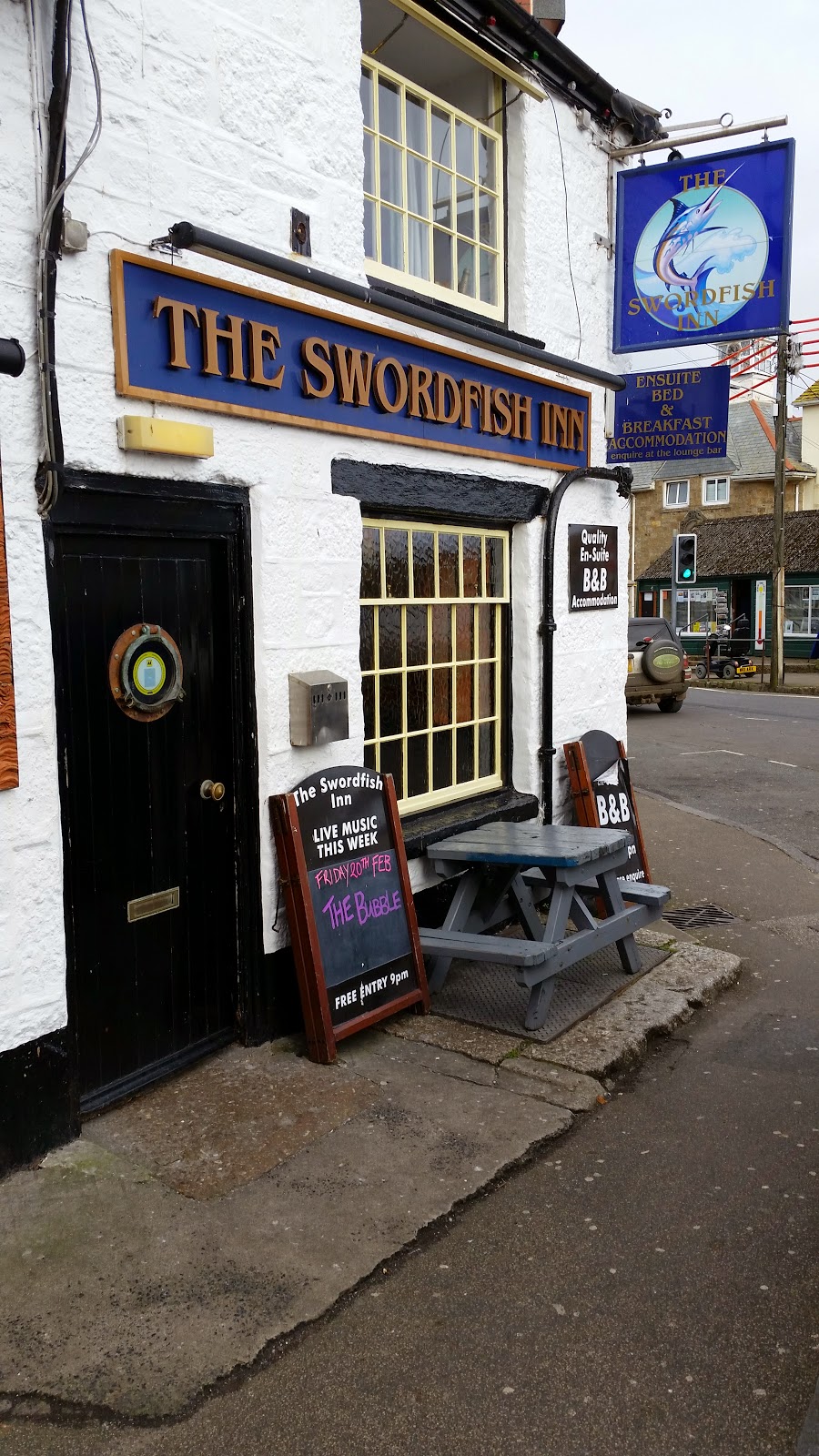 On the way back to the house we stopped of at the Swordfish Inn (which was featured on the Ross Kemp show The Toughest Pubs in Britain ) this is where Dot & Gordon first met !, they were well received by the locals when we arrived ....one chap shouting across the bar " Bloody 'ell, has your barge sunk". 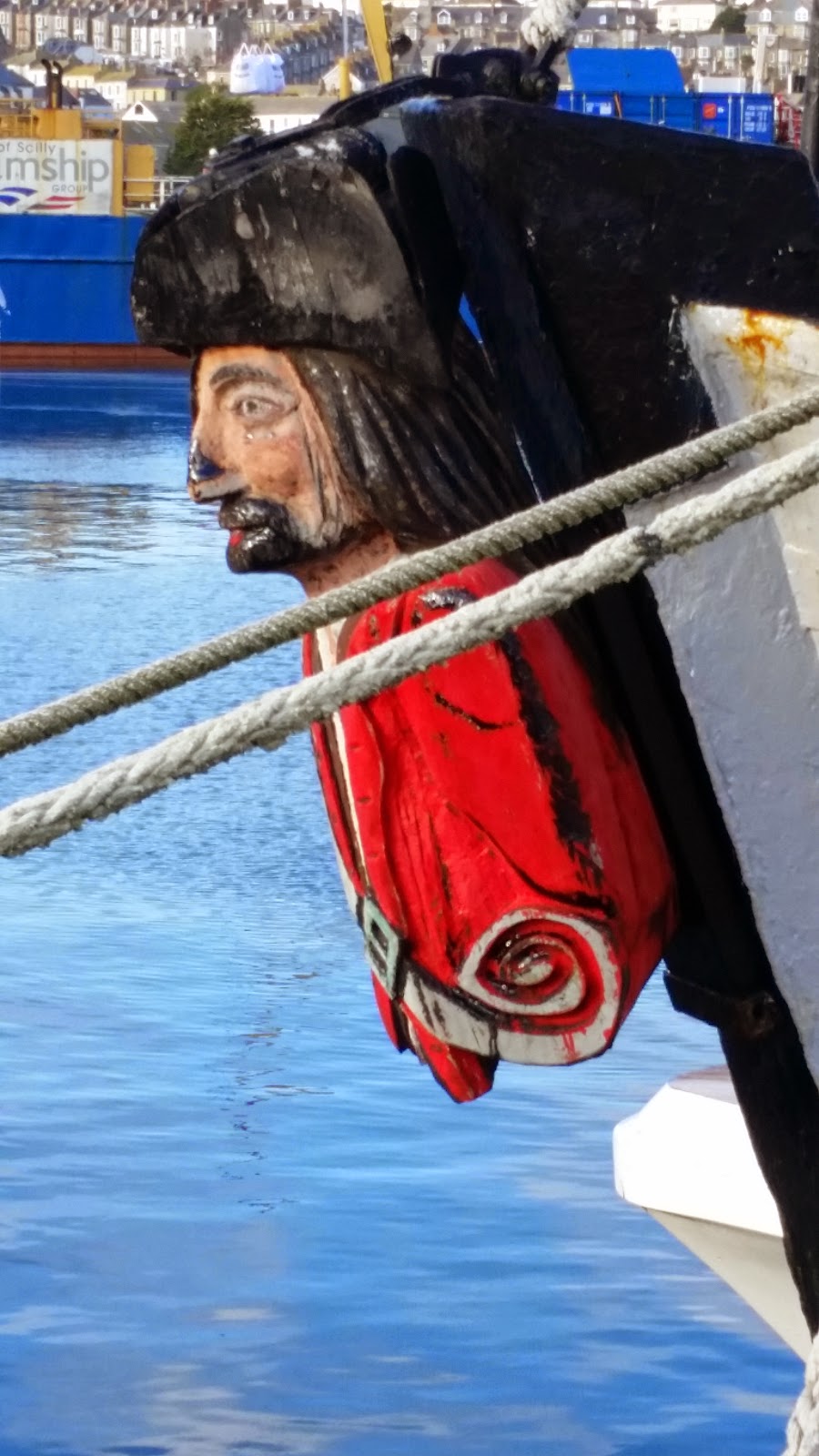 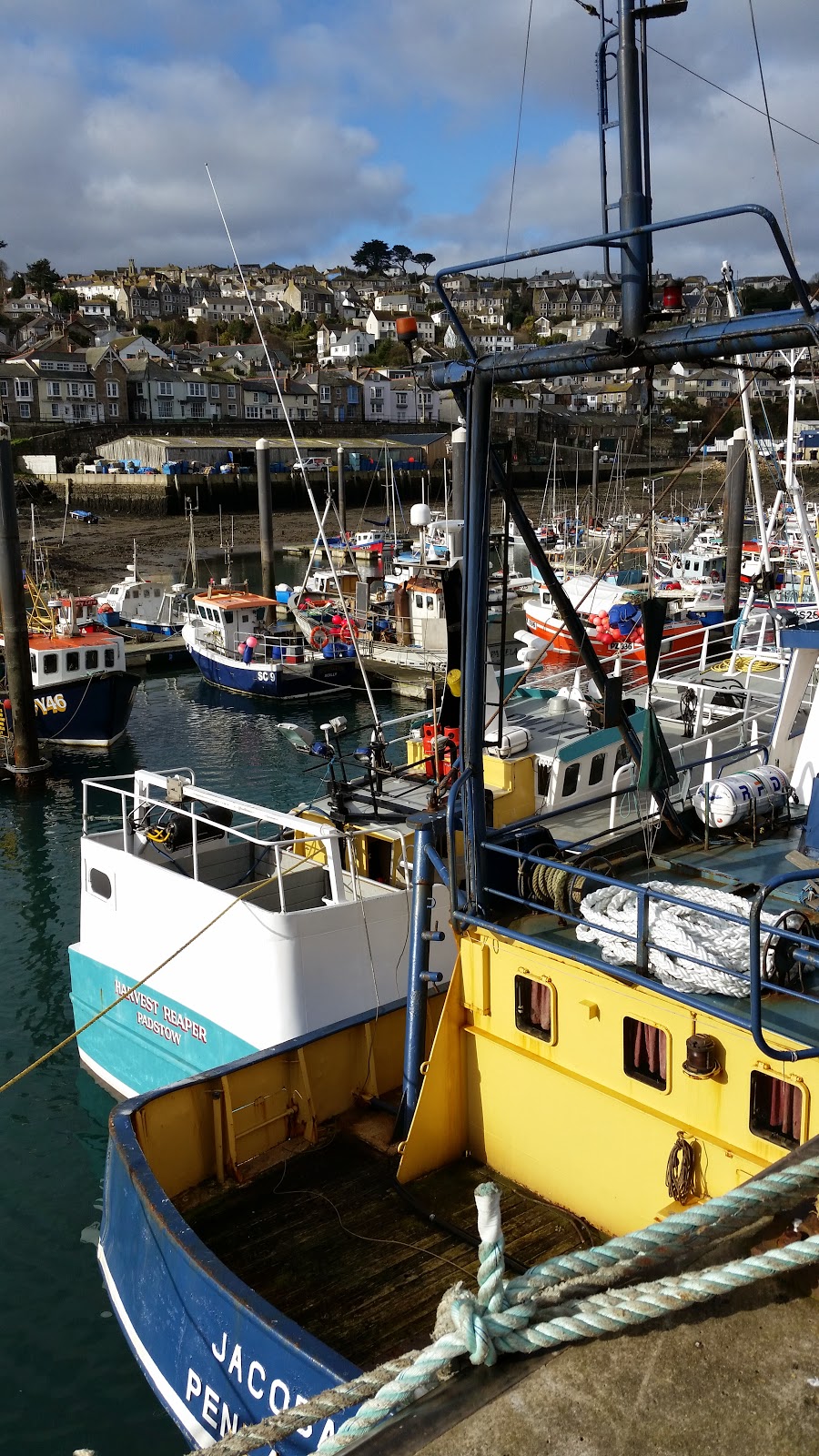 We are now in a large converted barn in Lamorna near Newlyn Cornwall for a week, with six friends.


Tuesday we had a train ride to St Ives, the seaside town and promenade were unexpectedly busy with locals and visitors enjoying the February sunshine. 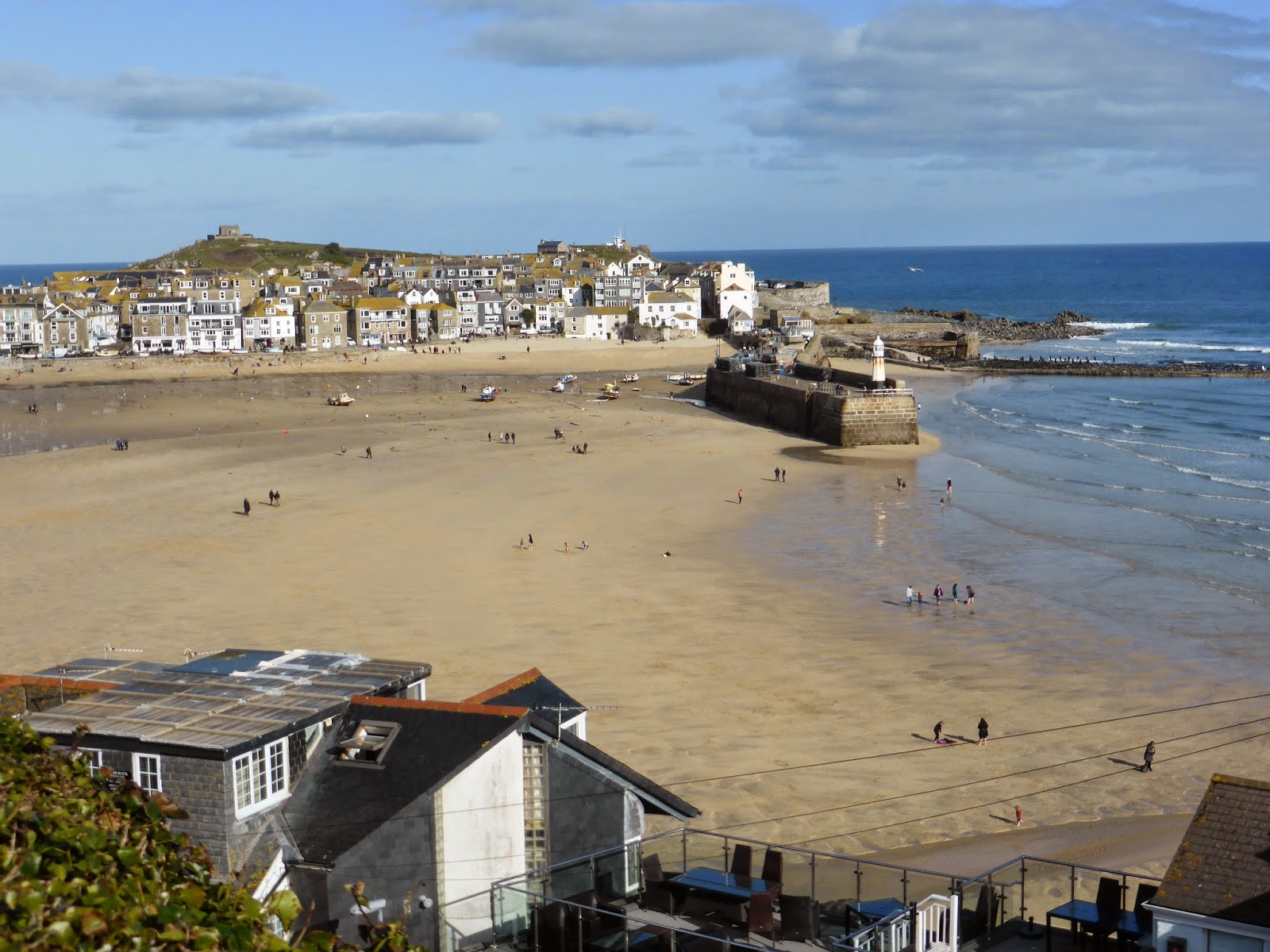 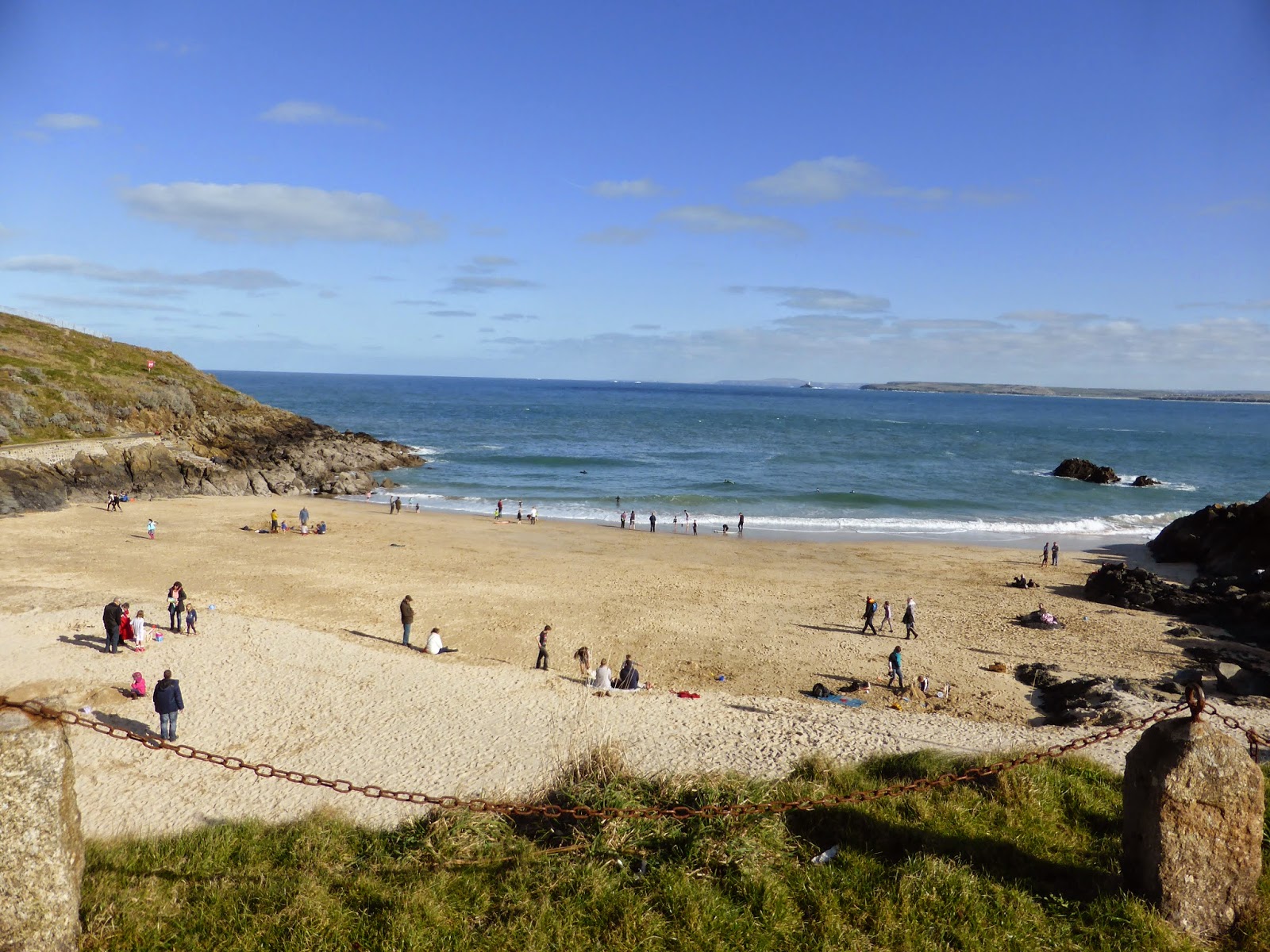 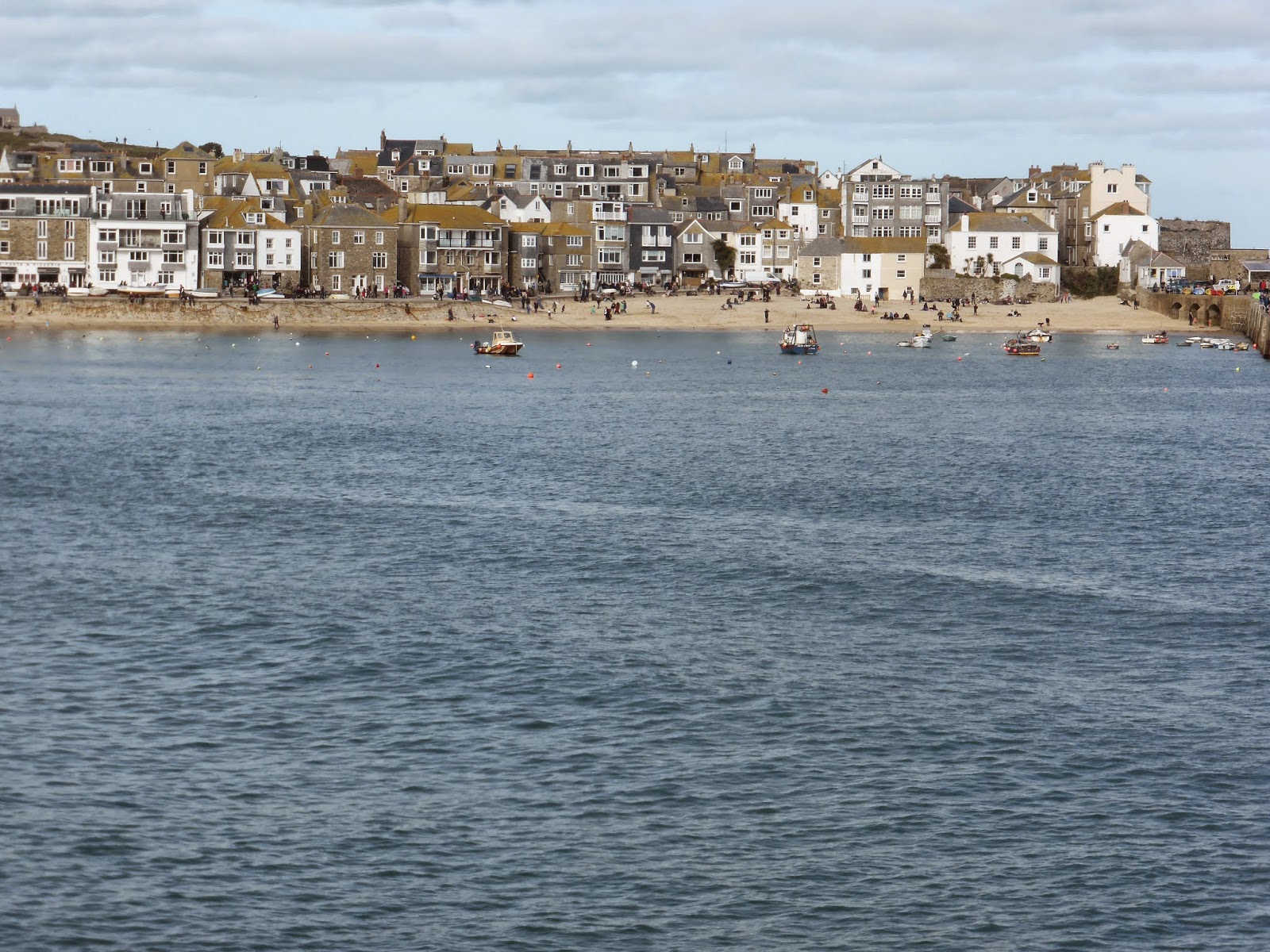 Wednesday was Paul's birthday so we donned 'Happy Hats' and went to Mousehole, a harbour village with solid stone homes built on narrow winding streets, for a celebratory lunch at the Coastguard. 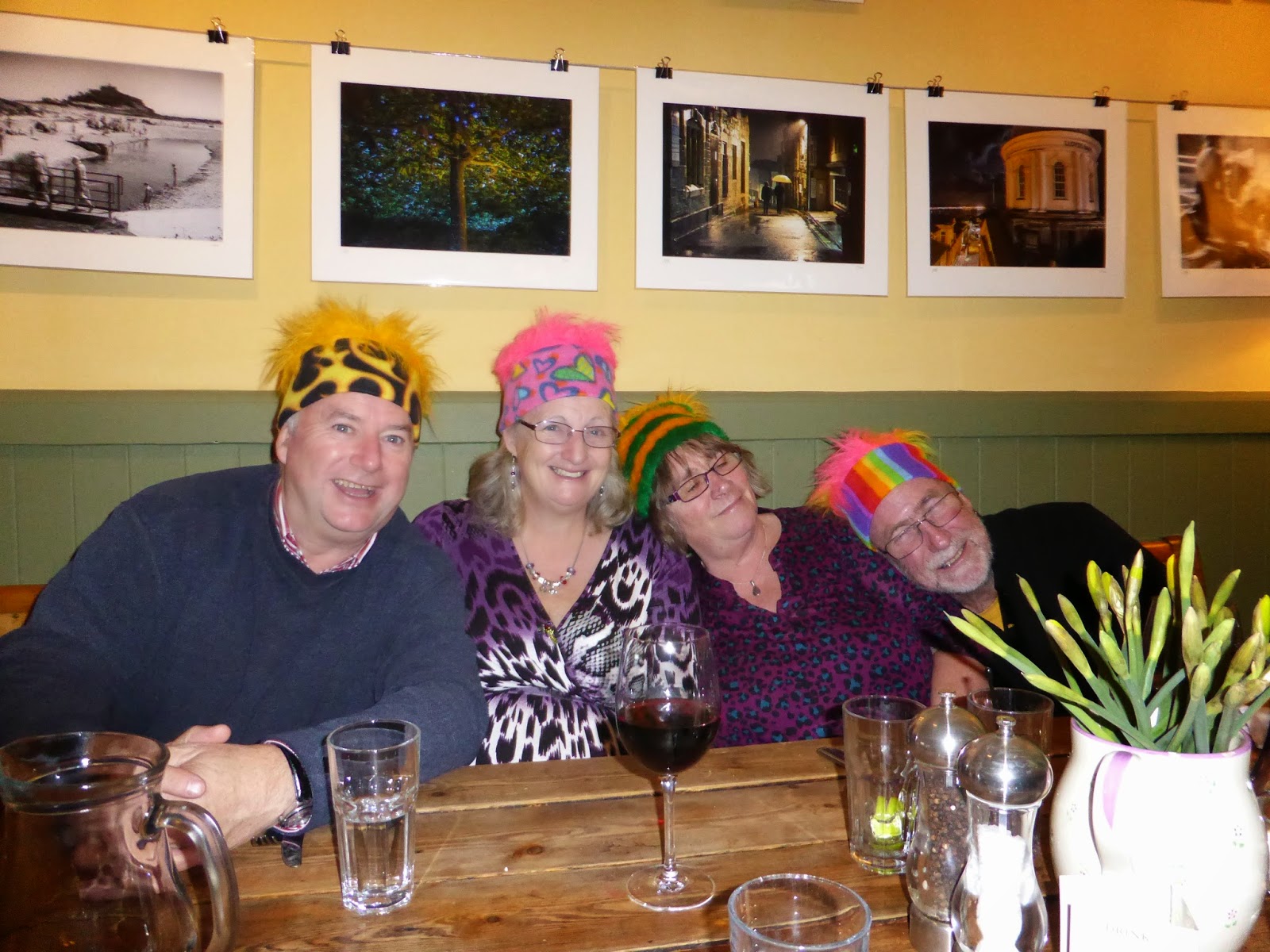 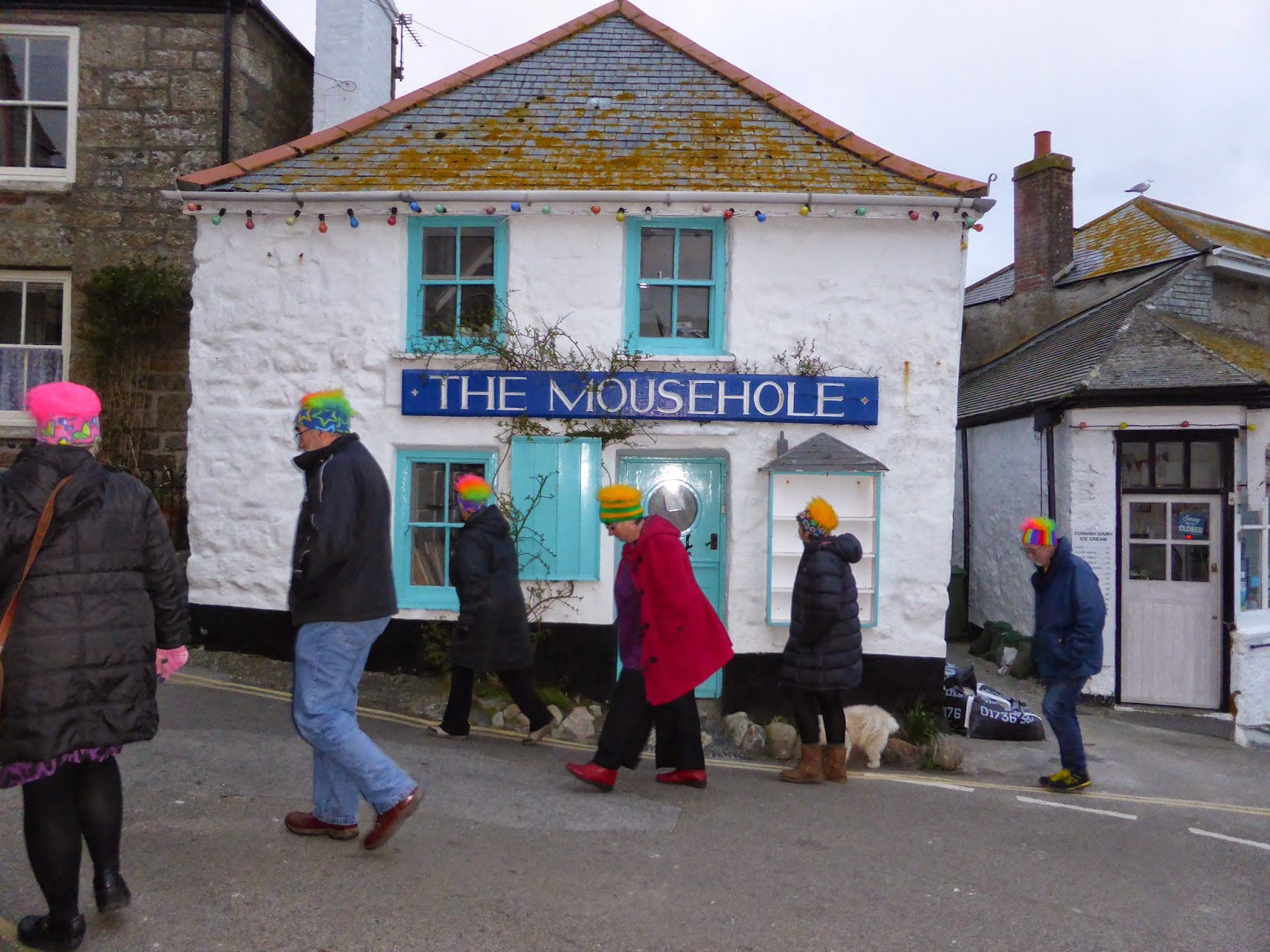 We only had to ring this wine bell for our glasses to be replenished by the attentive Raymondo. 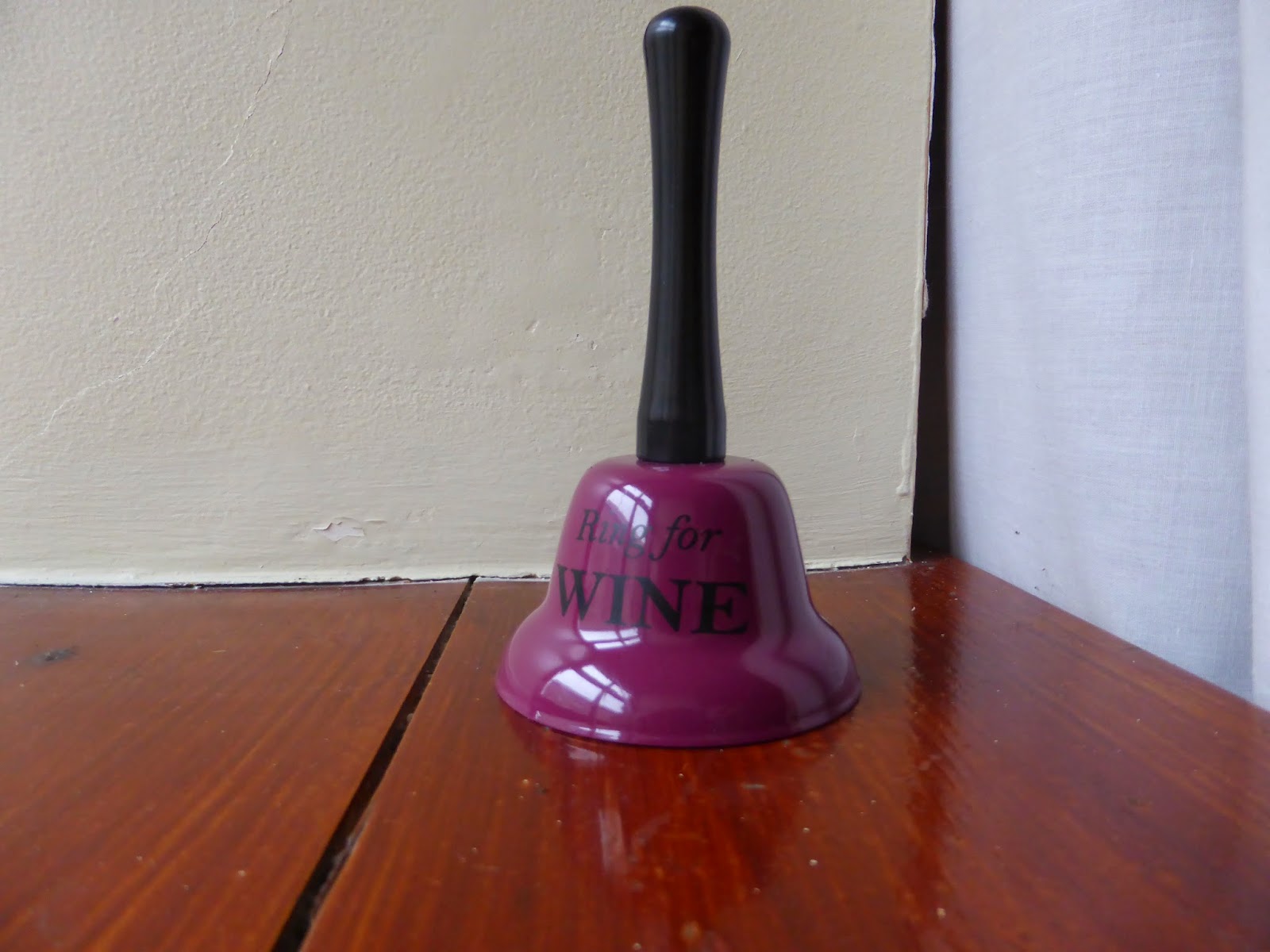 
Tuseday we had a drive over to Bollington to meet up with Ray & Diane, we had a good laugh and a decent lunch in Sutton Hall, after lunch we went to The Spinners Arms for a quick pint with Paul & Sammy, Bombo stayed at home to look after Elaine. Later we popped into see Gordon & Dot for a nightcap and to present Gordon with a pair of 'Happy Pants' to compliment the Happy Hat he wears. It's nice to be back among our boating chums.


Today we have headed south to Twickenham to watch the England v Italy game in the six nations competition. England won 47-17.

Tomorrow we are heading west to meet up with Dot, Gordon, Paul, Elaine,Ray and Diane in a cottage in Cornwall.

Heard in the crowd behind us ; Wife "What Nationality is the ref ?" ...Husband "Irish" .... Wife "He doesn't look Irish" ... Husband.." What do you expect a ruddy Leprechaun sitting on his shoulder"
Posted by Andy at 09:29 No comments:

We had an excellent cab driver to take us to Changi Airport for our flight home, he pointed out all points of interest with some history and facts and figures on the way.... on this trip we have used taxi's in Sydney, Melbourne, Brisbane, Cairns and Christchurch and all have been cheerful and helpful.

The flight to London was uneventful and we even managed a few hours kip en route. The 13.5 hour flight arrived ahead of schedule at 04:30 which was a bit early to wake our friends to come pick us up, so we had a coffee in Nero's then went for a cab. Black cab drivers are a breed apart, they don't like taking a fare out of Heathrow unless it is to London centre. I told the dispatcher at the taxi rank that we wanted a ride to Shepperton which is a 25 minute journey from T5, agreed an extortionate price of £55, then the dispatcher said to walk along the rank of 20 black cabs (a shabbier lot of vehicles in one place I have never seen, what has happened to the days when they were pulled out of service because of a small dent or because the driver hadn't polished the body work) pleading until one excepted our fare. We tried 3, after Sue had torn a strip off the third then preceded to redden the face of the dispatcher we went to find an alternative mode of transport.

In the last six weeks we have travelled just over 26893 miles on 10 flights, it's a shame that the only bad service we received was when we got back to England at the taxi rank.

I went to the information desk who gave me a number of a local minicab firm called Green Tomato. I called the number a very helpful lady told me to go back to Costas and a cab would be with us in 20 minutes. I then get a text saying the cab has been dispatched with a link to a website to track the cab, which I did and watched it come around the perimeter road and into T5 short stay carpark. I then get another text saying the cab has arrived with the reg number and the name of the driver who appeared two minutes later with my name on a card, pushed our trolley of bags and loaded them into the boot for the ride to Shepperton £27, what a great service and very safe for lone female travellers.

Enough of the rant about Cockney Cowboys, we are now back on board FL, we came back to a warm cosy boat thanks to our friend Gordon who lit the Epping the previous evening and filled the water tank for us.

When the sun rises tomorrow it won't have the heat in it that it had yesterday.
Posted by Andy at 10:06 No comments:

Today we hopped on the 'hop on hop off' bus that takes it's passengers around the city dropping and picking customers up at major tourist spots.

We hopped off at the Singapore Flyer, to have a look at the neighbourhood from the top of this giant observation wheel. Great views from up the top of the F1 track and over a hundred container ships waiting in the bay for a turn at the dock. 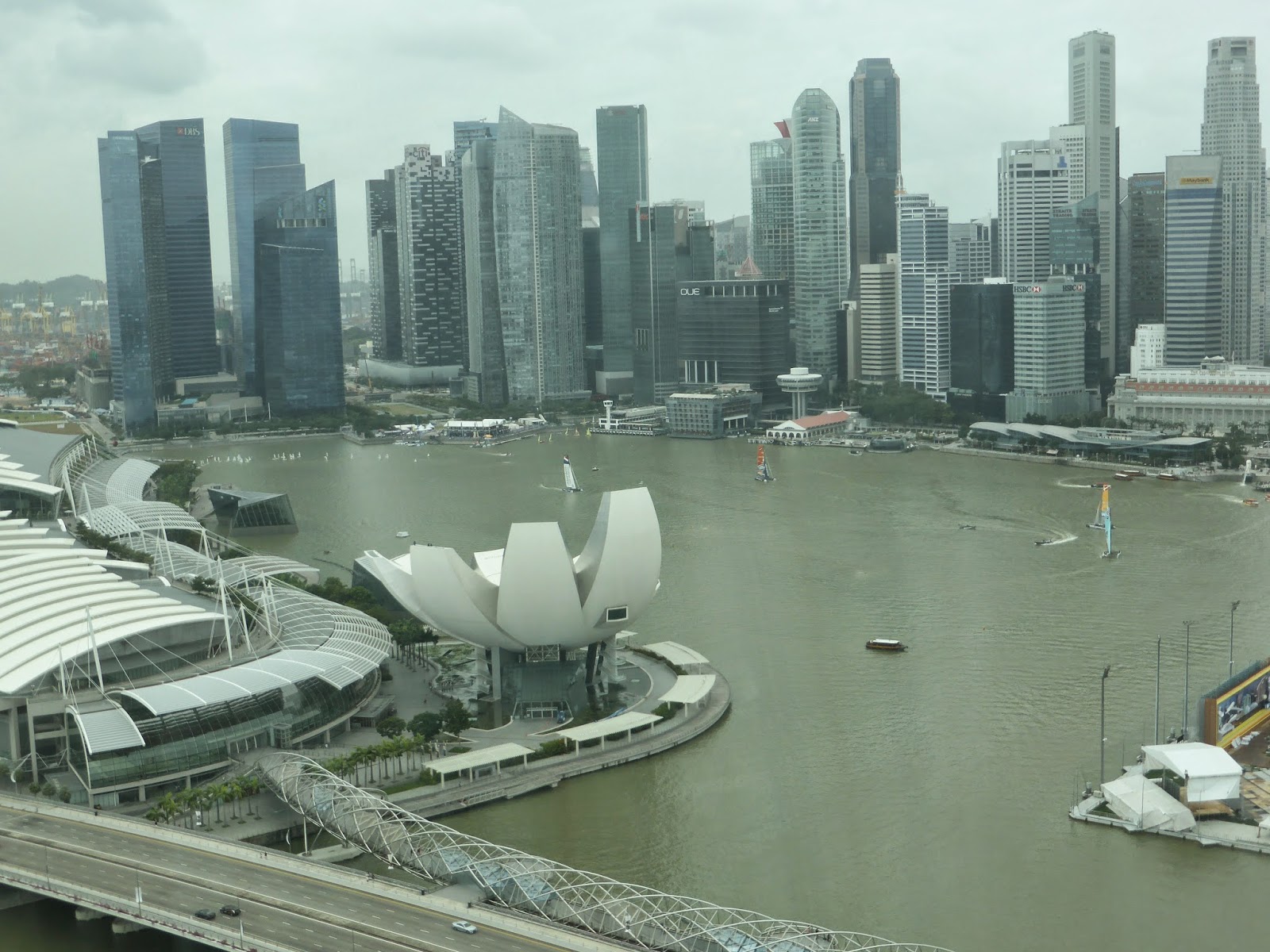 We went barefoot to visit the Sri Mariamman Hindu temple, the oldest Hindu temple in Singapore 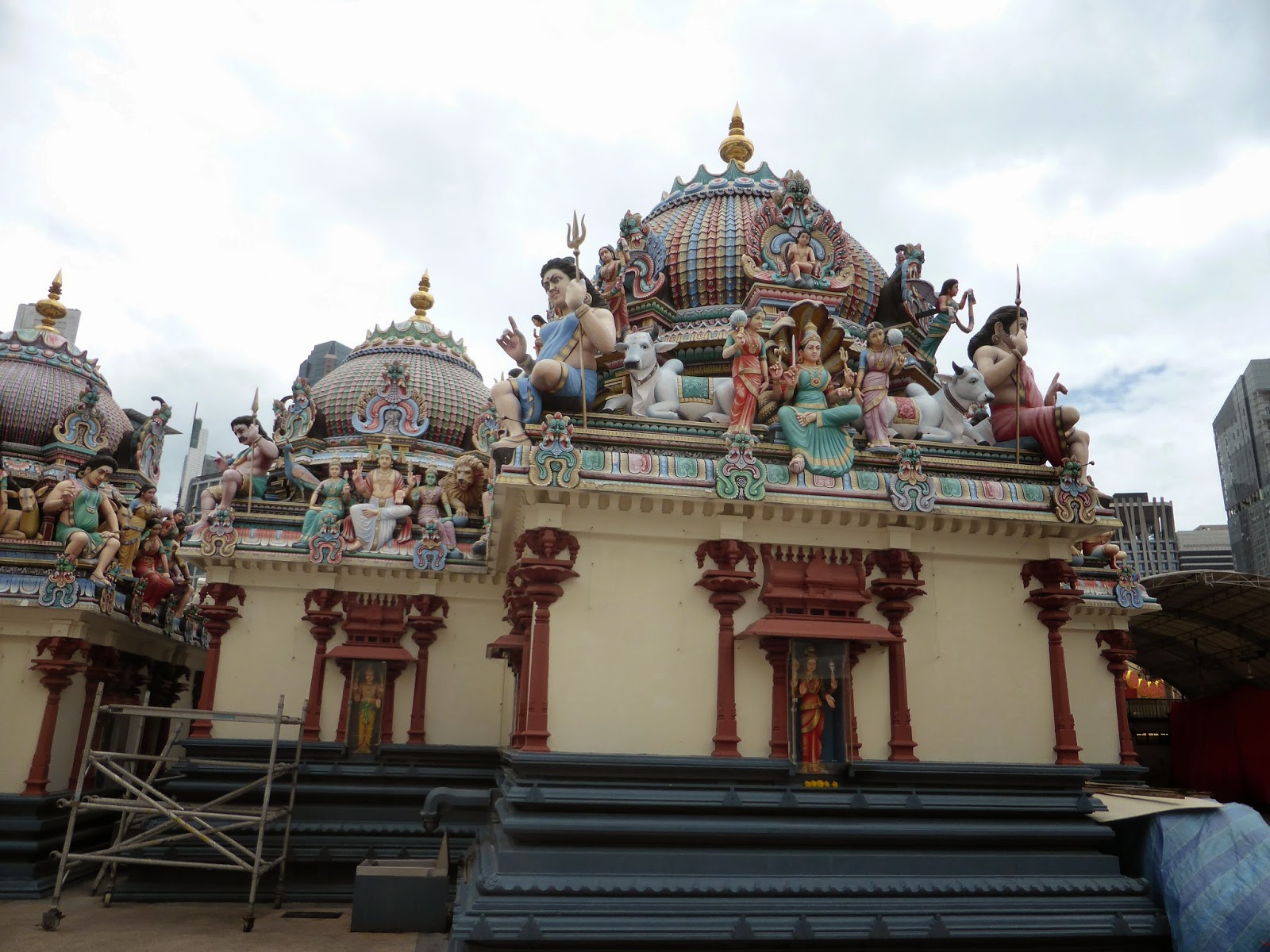 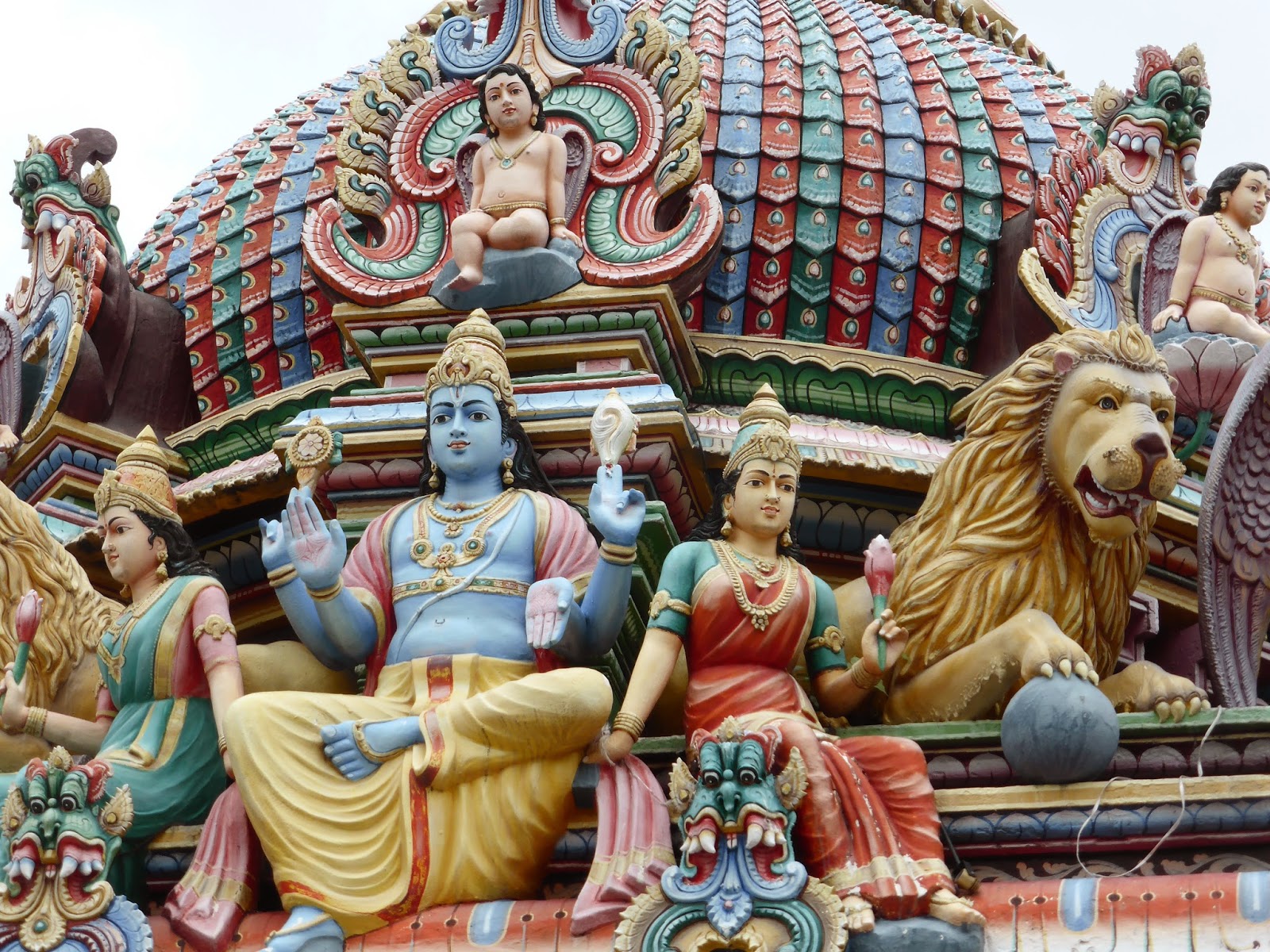 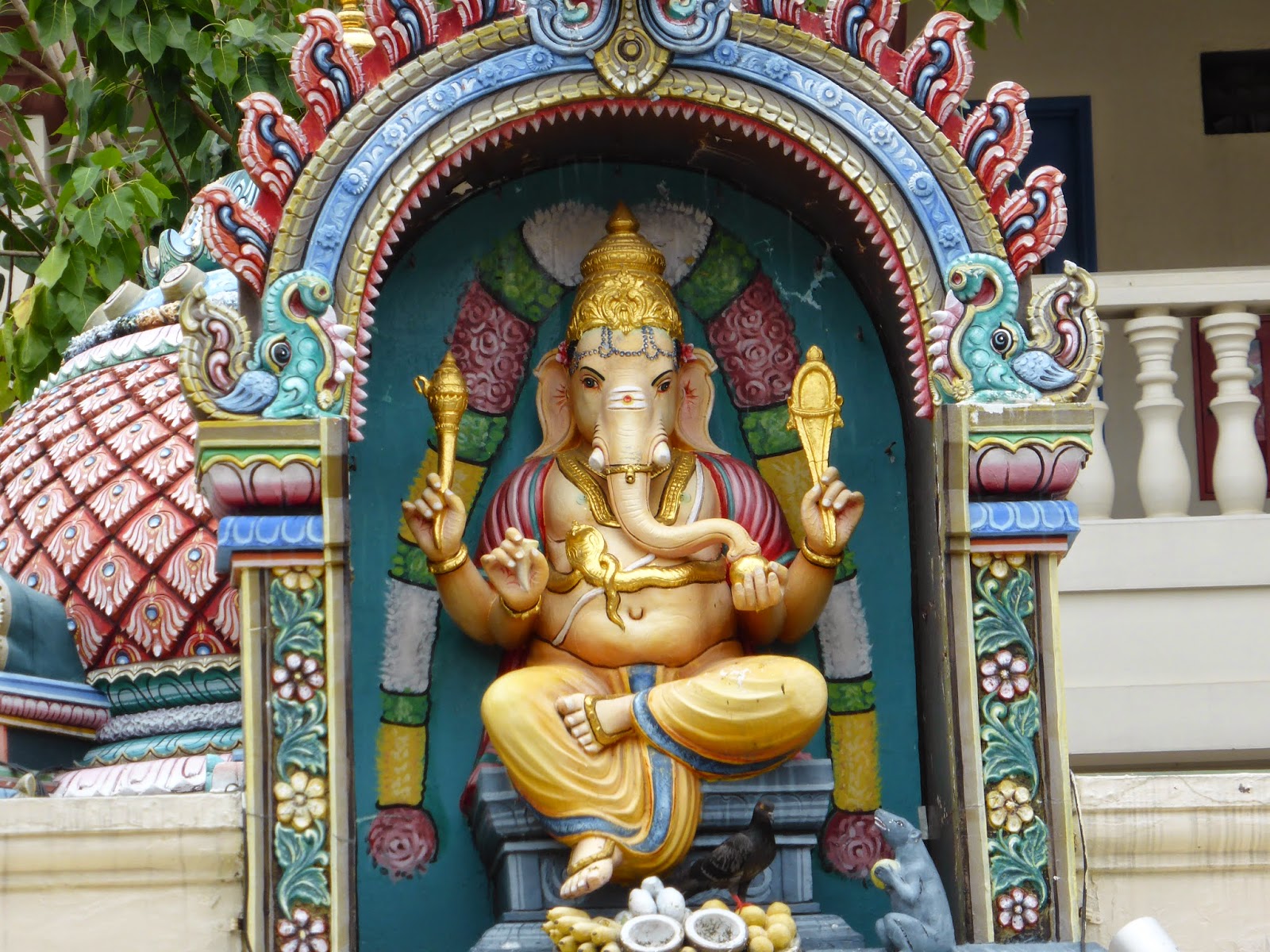 It is very warm and humid in Singapore but that didn't put us off walking down to the harbour for a short cruise aboard a 'Bumboat' a sort of battery powered water taxis built from old working boats.

On our way we stopped off at Raffles for cocktails. 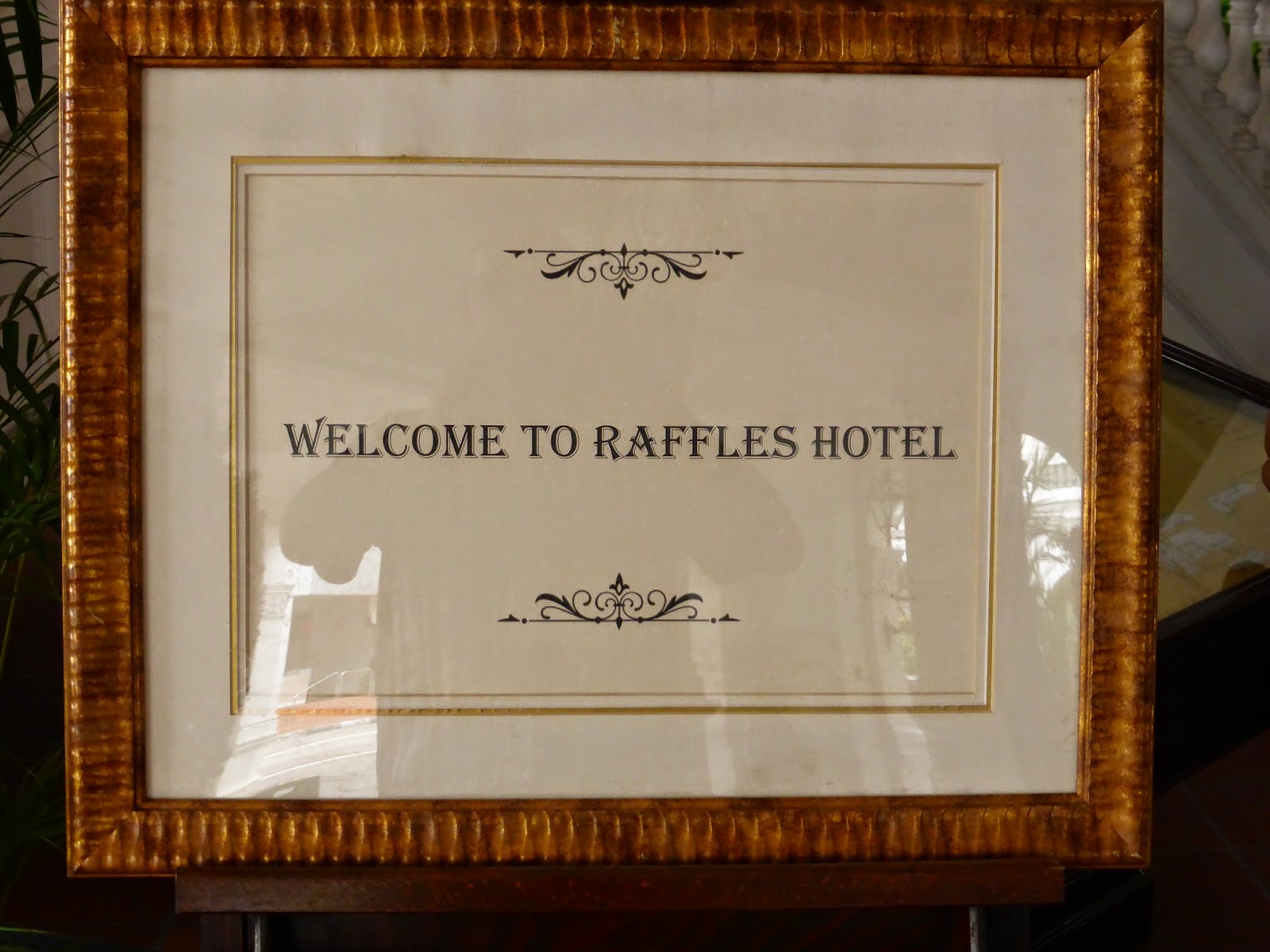 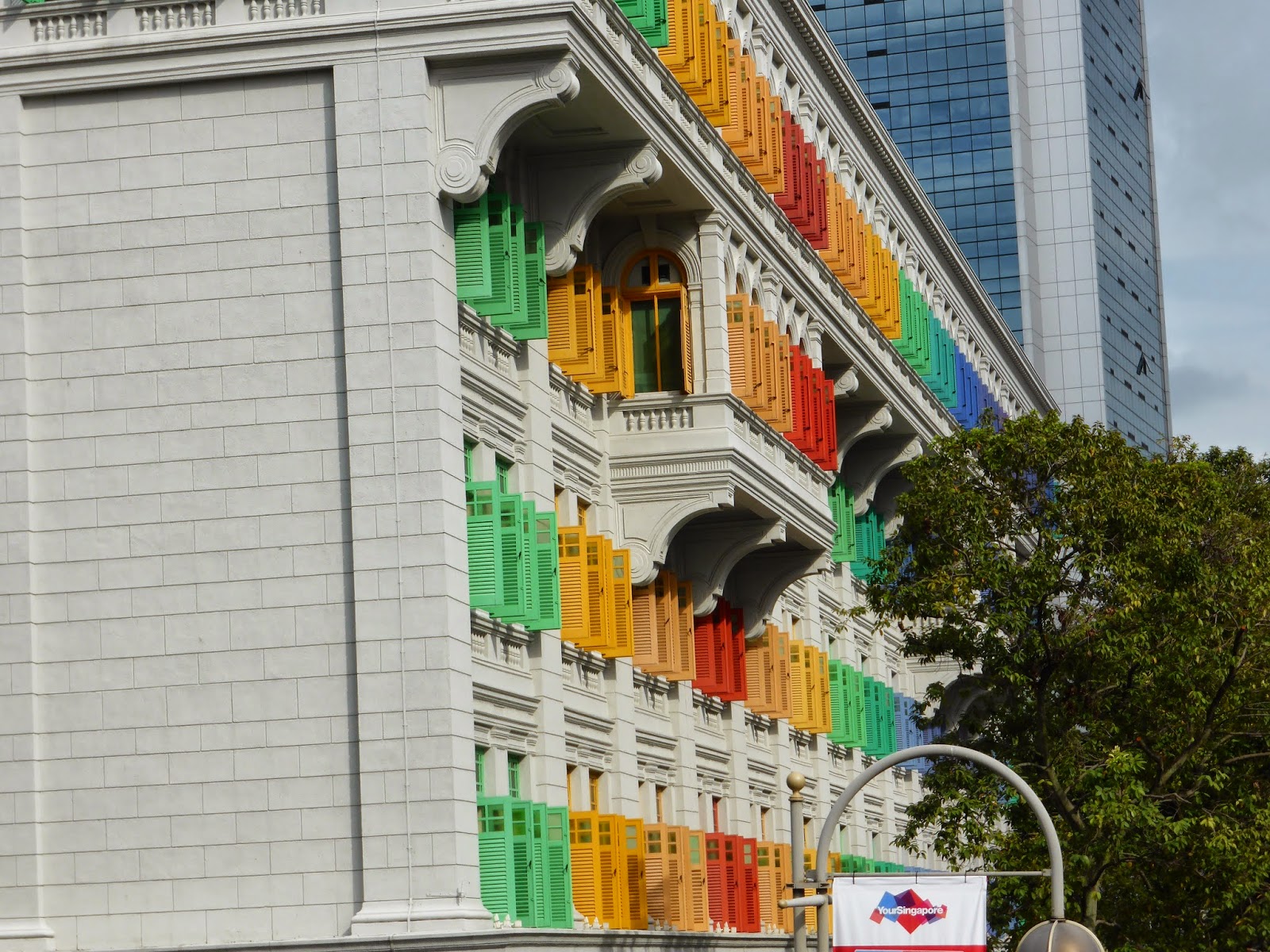