The Bargee near Braunston.

The last two days cruising we have taken a battering from the element's. Yesterday it was  very wet, luckily there was no wind to accompany the constant soaking I got at the tiller, welcomed hot tea and coffee passed out of the back hatch kept me going, the truth is I like cruising in the rain, as long as it isn't windy.

We turned off the Coventry at Hawkesbury Junction through the stoplock and onto the north Oxford canal, passing under the M69 then the M6, the canal arc's around the countryside in isolation until we get through the Newbold Tunnel and into Rugby, the river Avon is crossed unnoticed on an aqueduct before we reach our overnight mooring at the golf course by Clifton Brook. I saw four voles along this stretch swimming from the towpath side to the offside, can't be any mink around.

Today was dry as we left the mooring, the first two locks of the three Hillmorton Locks have lock keepers in attendance. C&RT are here in force repairing one half of the paired locks. We made a stop at The Canal Shop's wharf to chat to them about the Airhead composting toilet, we left impressed if all the claims made are correct but still undecided, we will chat with them again at the Crick Show before making a decision.

As we left the wharf the first downpour bounced off FL's roof and my hood. Later it was hail that stung my hand on the tiller, this time it had wind to drive it, then it was thunder. That did it we moored up at Navigation Bridge 2 miles from Braunston.

This afternoon we watched the 1964 film 'The Bargee' starring Harry H Corbett, Ronnie Barker and Eric Sykes which we both enjoyed.

Corbett plays a boatman Casanova with a girl in every town enroute, the boats are superbly liveried British Waterways examples. The main location the fantastically named 'Leg O' Mutton lock is in fact Marsworth Top Lock on the Grand Union. Ironically the 1964 film was around the time the canal carrying companies had all but died off, the big freeze in 1963 being the straw that broke the camels back. 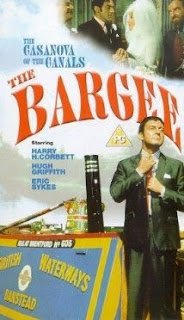 We've had an Airhead since 2012 and we love it. Freedom from Elsans is pure bliss. No chemicals, no disgusting smells, low maintenance, and easy to clean out once a month. We know of 7 boats who have switched to an Airhead toilet and all are pleased.
Jaqueline