... Junta ensure the workers take good care of the beach by giving it regular maintenance. The Easter holidays have seen the promenade become busier with more establishments opening and lots of families enjoying the beach.

I caught myself telling someone the other day that the apartment we rent  "is too small to live in all year round"..... fool ..... we can live comfortably in the confines of a narrowboat all year. 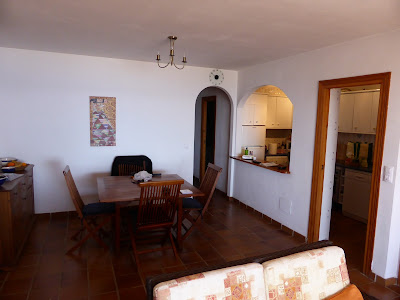 Weather wise it hasn't been out of the low/mid twenty's for a week and is set to continue. The locals are still in coats though! 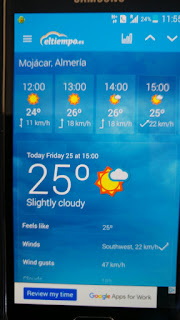 Monday- Sue and I  looked back on 29 years of memories since getting married on this day in 1987. To celebrate we had lunch of tapas and an evening meal out with friends who unexpectedly and very kindly footed the bill.


I am looking forward to getting back to FL soon to get her ready to continue our voyage.

St Patrick's day is a good enough reason to get down the Emerald Isle pub and have a couple of pints of guinness with friends. Any old excuse it seems this winter, football & rugby being the two most common excuses made to have a jar or two.... the pubs screens show it all, our tv in the apartment doesn't (a good excuse I think).

On paddy's day I celebrate the 50% of Sligo blood coursing in my veins. On this day when the music starts I cannot stop my feet from tapping to the beat of the fiddle & Bodhran, as the black stuff flows the feet get a life of their own as I slowly morph into  "Michael Stavros Flatley" . Unfortunately or luckily no photo's survived of this feat.

It was an early start around 15:00 with an interlude at 19:00 for dinner in a nearby restaurant then back to the pub to see out the day.

It's Saturday today and three games of rugby starting with Wales v Italy at 15:30 and finishing with France V England at 21:00.....it's back to the pub.....any excuse! 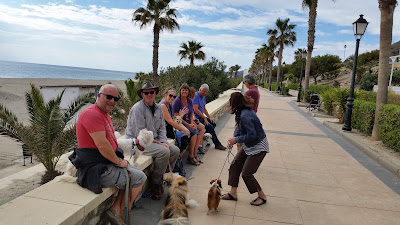 After an early morning walk and chat with some friendly locals on the Prom, we took the little Fiat 500 hire car along the coast about 70k to check out San Jose.

SJ is a small white washed village and fishing port set around a small sandy bay with a marina crammed full of leisure craft and a few fishing boats. 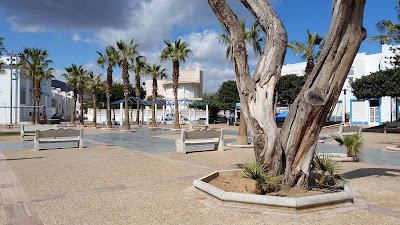 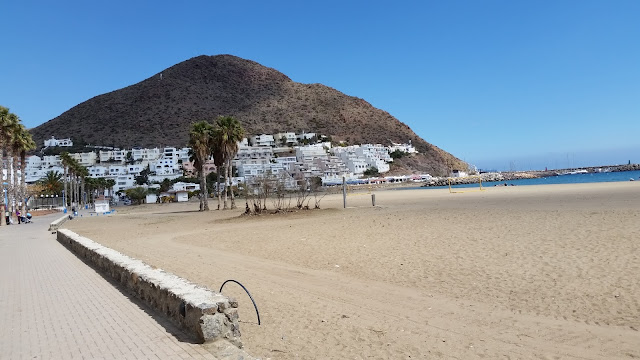 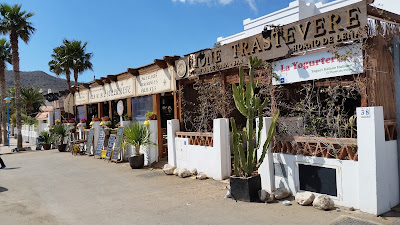 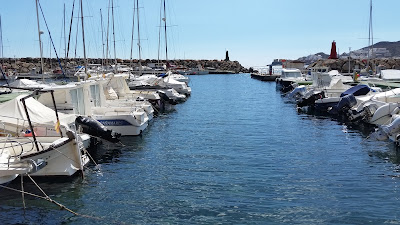 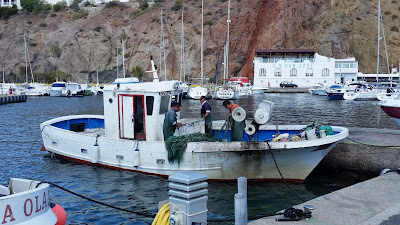 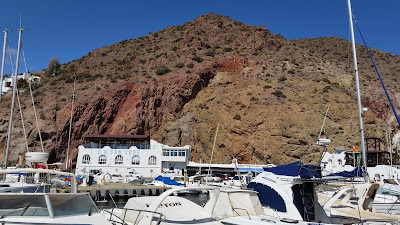 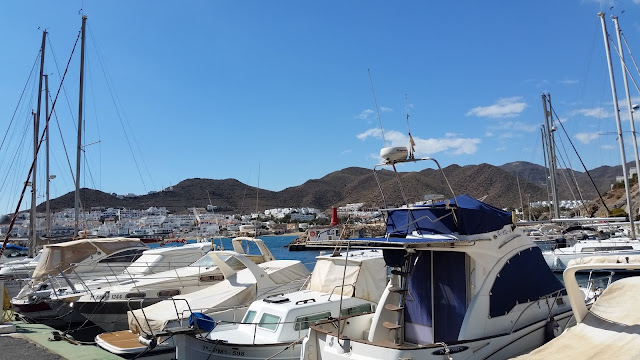 We watched the England v Wales game in the Irish pub, what a great game. We had a Welsh boyo from the valleys sitting behind us who knew better than the ref on multiple decisions. Dan Cole did his usual infringements which meant England were down a man for the last ten minutes of the game. This allowed a Welsh revival, but they couldn't overturn the English rout of the first half. A resounding rendition of Swing low sweet Chariot in the bar mellowed the Welsh contingent.

After the match we had a meal in Al Punto, Sue had a Ribeye steak salad while I opted for the victorious  all you can eat 'fat boy' grill. They give you a square coaster, green one side red the other as long as the green is showing on the table they keep coming with meat from the grill. I had chicken, lamb, bacon, steak, pork and sausage with my chips, black beans and rice. 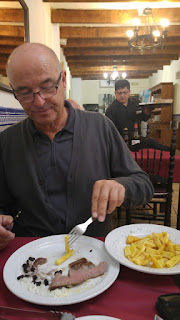 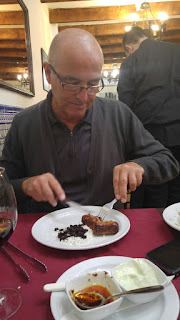 Our daughter has enjoyed her brief visit to Mojacar, here for mother's day and dad's birthday. It hasn't been the best week weather wise ( by Andalusia standards) but she has seen some sun. 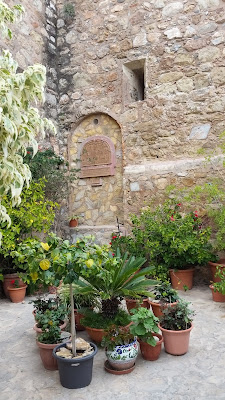 Went out for dinner last night to the Bella Vista, a smart establishment inside (from the outside looks a bit canteenish). The service has been possibly the best we have come across so far in Spain by the friendly staff and the food excellent.

We all had three courses, I chose the mussel starter followed by the chicken with blue cheese and walnut sauce, a creme brulee finished me off, all for 12Euro!

Its now 09:30 and we will soon be off to Almeria airport to pick up a special package off this mornings Easyjet.

This week has probably been the warmest since we have been here, made all the more sunnier because we met up with my cousin Anita and Michael, unbeknown to us they were also taking a winter break only 10k from Mojacar. It was thanks to my Canadian cousin Stuart that we were able to get together over a beer and tapas for a catch up. We have arranged another get together for next week.

Today I went go-karting at a track in Almeria with seven other Mojacar residents. I knew I wouldn't win on my first attempt, all the other guys bar one have been to the track at least once, the winners were multiple attendees, but I was quietly confident I wouldn't take the wooden spoon.

The program; a practise session followed by a timed qualifying session to gain a grid position for the first of two 16 lap races, I was mighty pleased to be in pole position for the reverse grid race which meant I had posted the slowest lap time during qualifying.

My plan for this race was to make the kart as wide as possible and not let anyone pass, this plan was doomed when five skinny racers flashed past me followed by a fat bloke in a Man U t-shirt and the old boy on the number 21 bus. I'd have to come up with a different plan for race two.

Race two was a conventional grid and I took up my position at the back of the pack, as this race was for trophies plus champagne it would be no point in me trying to compete with the old hands, my plan was not come last...again. That meant trying to get in front of my buddy before the checkered flag. I would be up against it as Martin has been a professional driver in the past.

The race started and I stuck on his tail for three laps even gently nudging the rear bumper at the exit of one corner. I went in a little too hot in hairpin corner, dabbed the brakes and spun the kart, that put me half a lap behind and I finished last again. 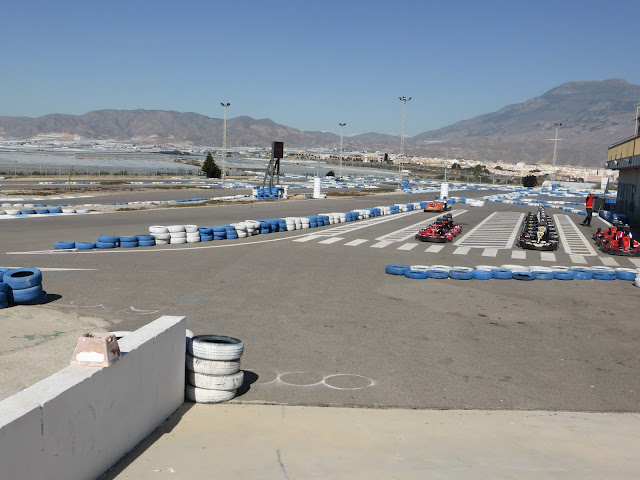 Even though I came last on this occasion I had a real blast and can't wait to have another go.
Posted by Andy at 11:57 No comments:


To counter the waistband tightening effect of watching all the weekend's rugby in the pub, I had a hike up to an observation area on top of the hills overlooking Mojacar, while Sue worked on her tan. 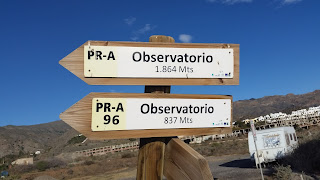 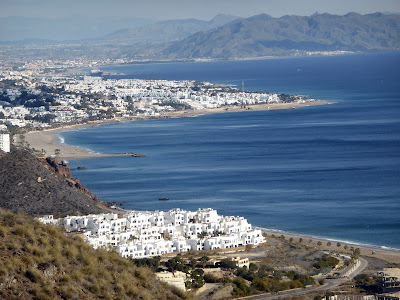 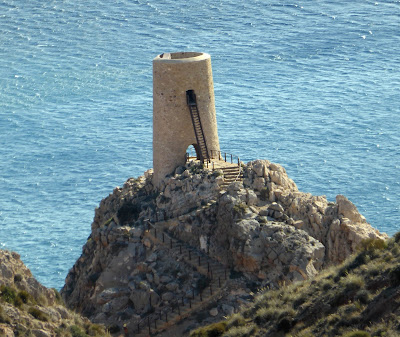 Among the motor homes on the beach were this pair: