We were up early and had bacon banjo's made with Sue's homemade bread before setting off. Similar day to yesterday so not much to write here. Most excitement was 2 chaps on the towpath effing and blinding at each other and at one time I thought might come to blows. Unsure what they were rowing about one was off a boat which had broken down the other may have been "the town drunk", anyway they weren't teenagers and should know better.
Banbury canal side was bursting at the seams with narrow boats as there had been a food festival over the weekend.click here
We are now moored in Cropredy, I haven't taken many pictures as until we get to Napton Junction which is 16 miles and 17 lock's from here and head north towards Warwick we won't see anything new, we will just be showing Betty places we have already been. 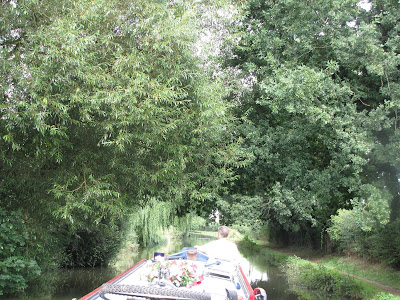 The hedges and trees form tunnels in places 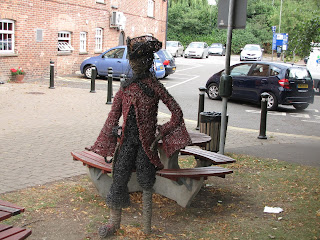 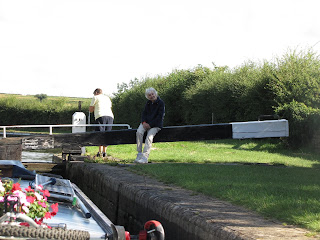 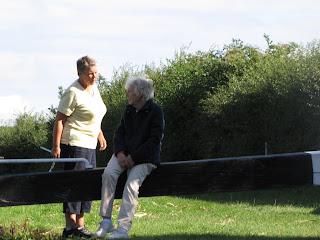 Get of your bum and push.

Cropredy is the quintessential English Village with various old brick houses and plenty of thatched roofs  including a sandstone church. It is a truly beautiful village all though some of it's inhabitants are ugly. I say this because while Sue was fishing and Betty reading a walked into the village in search of real ale, so I headed for the Red Lion and purchased a glass of IPA and sat myself in a corner while the obviously locals were at the bar, three couples and two small children age about 5 and 7. No problem for me to have youngsters in the bar before 7pm, but the language the males of this group were using was simply appalling especially the father of the 5 year old.. Rarely was a sentenced uttered without a profanity and all in ear shot of the youngsters. I drank up quickly and left.