This morning we winded FL at Braunston marina and moored on the water point. While she was filling I ordered a bacon banjo from the Gongoozlers Rest, which was delivered to the waterpoint by one of Avril's crew. We moved on to a 48 hour mooring where I enlisted the help of the silver haired visitor to polish the starboard side.

Working so fast she is a blurr 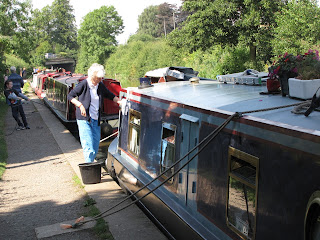 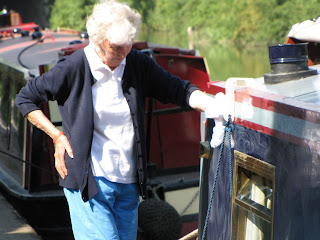 Not a lot of elbow grease going on here me thinks

Both side's are finished now and FL is looking good apart from below the gunnel where there are numerous collision scrapes but I have decided to paint that area at the end of each year, rather than get the paint and brushes out frequently.

I walked into the village and had a glass of lager in  the Wheatsheaf  (now I have frequented all 4 establishments in Braunston) While there Sue texted me to say she was on her way to the Admiral Nelson with Betty in tow. So I met up with them there and we sat in the garden watching the lock traffic. 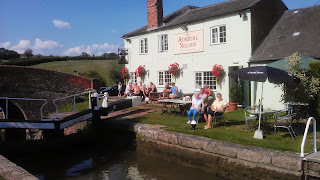 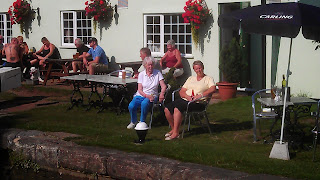 At The Admiral Nelson

Strange name for a pub on the Grand Union canal, I'm pretty sure Horatio was long dead before the canal was built and I shouldn't of thought  HMS Victory or any of his fleet would fit in the lock.

Going to pop back to the Wheatsheaf to watch the Manu v Chelsea game.