Merry Christmas to you all in Bloggdom
Posted by Andy at 09:21 No comments:

We went off to Middlewich to purchase a few items from Kings Lock Chandlery they are agents for Vetus engines. I wanted two seals for the Vetus stern tube, unfortunately they don't supply the individual seals, but they do supply them in their housing assembly. Instead of a few pounds for the seals I ended up £96 out of pocket. Vetus parts are dammed expensive, I'll need to find a supplier of the seals for future maintenance. At the moment there is only about a tablespoon of drips at the end of a days cruising( the Vetus stern tube is supposed to be dripless). They can be replaced 'in situ' but I will do the job when FL comes out of the water to be blacked.

Yesterday I drained the coolant from the engine, skin tank and calorifier flushed them with fresh water and renewed with fresh antifreeze solution. While I was at it we drained the central heating system and renewed the antifreeze in that too. FL is now ready for what the winter can throw her way should be good to -42 !

We are going home tomorrow, leaving the car at Liverpool airport and getting an Easyjet flight to IOM it's cheaper than taking the car on the ferry, a lot quicker too. We will be back in time to see in the New Year at the Royal Exchange.

Saturday 6th Dec.
The car hasn't had a wash since 2012 so we dropped it off to the husbands of the girls that sell the Big Issue in Stone and Stafford towns while we had a look around Stone Farmers Market, we had lunch in the Royal Exchange with Dot, Gordon, Phil and Lynne. My eastern european cousins did an excellent job on the car, shiny inside and out when we picked it up.

Sunday - Sue walked to Aston Lock to set the gates for  EHC (Pasty Boat) arrival, soon after they were snugly connected to the grid in the marina.


Monday - Sue thought FL needed to look festive, we bought some festive installations in the way of battery operated lights and a diminutive tree from Poundland the lights are sellotaped to FL's interior in various places, I'm hoping the tape doesn't pull the veneer/varnish off when we take them down. 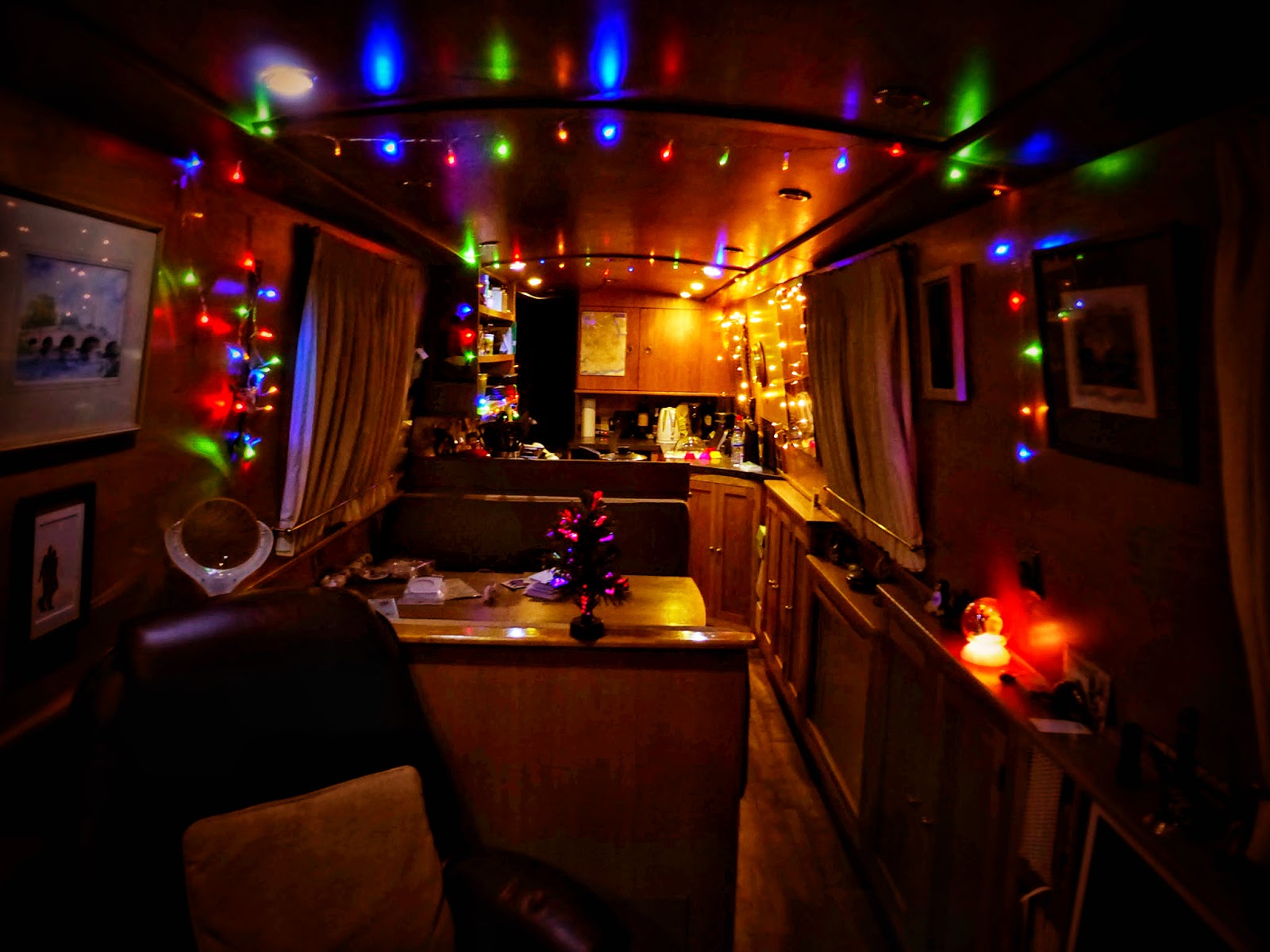 Thursday we drove to Birmingham and had a wander around the German Christmas Market. Nothing different there, stalls and products were exactly the same as when we visited last year, even the customers looked familiar, lunch was excellent spit-roasted ham rolls, a repeat of last year too. The market is well worth a visit and I bet we will be back again next year.


Temperature has taken a tumble this week with some sub zero's overnight, but it is snug and warm in FL, the Epping stove has been on 24/7 for the last few weeks. The stove is at one end of FL gives a range of temperatures throughout the boat, nice and warm in the saloon graduating to cool in the bedroom, which is the way we like it, the diesel-fired central heating is redundant with the stove lit. Occasionally we need to open the doors to let the heat out. The floor of the boat always stays cool as it's below water level without the spray foam insulation the cabin roof and sides have, that is why most boats have footstools.

Friday we had an enjoyable afternoon over an ale or two in the Royal Exchange with Dot, Gordon, Richard and Sharon.

Saturday it was a trip to the Midland Chandlers for Gordon and me, I had intended to get the blacking for FL but then thought I'd leave it till nearer the time FL comes out the water, maybe MC will have a January sale. I did come away with a length of fuel hose and clips while Gordon purchased a whole bank of batteries. In the evening we got a surprise call... Diane, Ray, Paul and Elaine were in the bar at the Stone hotel, a great evening ensued catching up with the 'gang' a day earlier than expected, we will meet up again on Sunday for an arranged Christmas dinner at the Old Post Office,  £8.49 per head including a drink of choice, very reasonable, there will be 18 of us at the table... we are all looking forward to that.

So Carl is king of the jungle (I'm a Celeb get me out of here). Who'd of thought the fearless...(he held the Isle of Man TT lap record for seven years from 1992).... scary eyed four times World Superbike Champion had such a big personalty.

The Burnley boys fearlessness was evident in the trials he undertook but we also saw a side to Carl we mostly didn't know existed, his softer side, especially when reduced to tears when his friend Jimmy was evicted from the camp....... well done Foggy.


Wednesday we dropped Sharon & Richard of at the station for their onward journey home to Portsmouth, from there we made our way to Manchester airport to collect Ray & Diane and take them to Overwater marina where their boat has been looked after while her crew circumnavigated the globe.

Friday was going to be my day for experiencing the other side of narrowboat cruising. The energetic bit, the bit that you need a tool for the job... and best of all, that part where you get to interact with other crews at locks. My usual interaction at locks is a quick "hi" as a boat passes me while I'm hanging on to the centre rope, I enjoy none of the jovial animated cheerful banter I see Sue engaged in with other crews while working the locks.

The plan was hatched a few days previously when I was contacted by friends to help get their boat from Rugeley to Stone.


Early Friday we were drinking coffee in Tesco's at Rugeley with Dot & Gordon. Sue and Dot went off to Stafford by car while I would lock wheel for Gordon to Stone, Pearson's guide had the trip down to five and a half hours while CanalplanAC had a cruise time of seven hours, it turned out the latter was spot on.

We untied the Pasty Boat from the bank at 09:30, the day was cold but still, with a few bright interludes to the grey skies during the trip. At the first lock... Colwich Lock... I hopped off the cruiser stern windlass in hand to work the lock, as I cranked the ground paddle open I am on my own, no other living soul around apart from Gordon holding the boat centre rope on the canal below. I was a solitary figure winding the paddles at the next couple of locks too... no one wanted to play. Where were all the other boaters?

At Haywood junction, the homemade Cornish Pasty, payment for my services, was warmed in the oven and devoured with mugs of hot tea while the water tank filled with water.

At Hoo Mill lock I spied somebody at the lock, right I thought here's my chance for some of that lockside interaction, pass the time of day with, perhaps share a joke with. As I strolled up to the lock swinging the lock key like a 50's football fan's rattle the somebody jumped on their bicycle and sped off down the towpath.

As we passed through Sandon Lock the degrees took quite a tumble and I abandoned Gordon at the helm and warmed up beside the log burner in the cabin. I was up again to do my duties at Aston lock, it was dusk as we moored below Star lock in Stone.

A message on my phone told us Sue and Dot were in the Royal Exchange and two pints of Steerage awaited us. It poured with rain as we left the boat and made our way to the pub in the dark, a couple of quarts later and a fish supper in 'spoons' I was getting all the interaction I could cope with. A very enjoyable day.

Had a good weekend.. watched England beat the Aussies at rugby (about time they won a game) in the Anchor with Gordon and Dot, there was a noisy group of lads out for a birthday bash on the next table who noisily sang English football chants, I did ask if they knew the English rugby anthem 'Swing Low, Sweet Chariot'  but although they reckoned they knew all songs.....it wasn't forth coming. They all left before half time, now we could hear the TV commentary. A theory of how a slave song became a rugby anthem can be found here. click

We had Sunday lunch in The Holly Bush with new neighbours Sharon and Richard, afterwards we were welcomed aboard . Engine room envy ensued.

Monday it was arse up head down the engine 'ole (you can see why I get engine room envy) to try and find out where an annoying coolant leak was coming from, spent a couple of hours down there cleaning out the bilge and checking/tightening hoses, unions and bolts. It's all dry at the moment so fingers crossed. I'll run the engine up to temperature and check down there again tomorrow.

NB's Two Jays and Klara are back in the marina today, it's always a pleasure to see Jim, Joan, Roly and Bev.

I had 4 x 5ltr cans of old engine oil from FL's oil changes to get rid of so took them to the local amenity site. Unfortunately, they are closed Monday and Tuesday so will have to hang on to it for a bit longer.
Posted by Andy at 11:15 No comments: