We pulled the pins at 11:00 for the short passage to moor in Braunston.

At the Plough we enjoyed an evening with the amiable Barry & Sandra from NB AreandAre, their blog of their previous boat Northern Pride was one of the first blogs I read when we were thinking about this lifestyle (Barry's photography of the canals on the blog were first class). It was dark when we left the pub, we walked down the hill to the canal, the path illuminated by iphone torches. 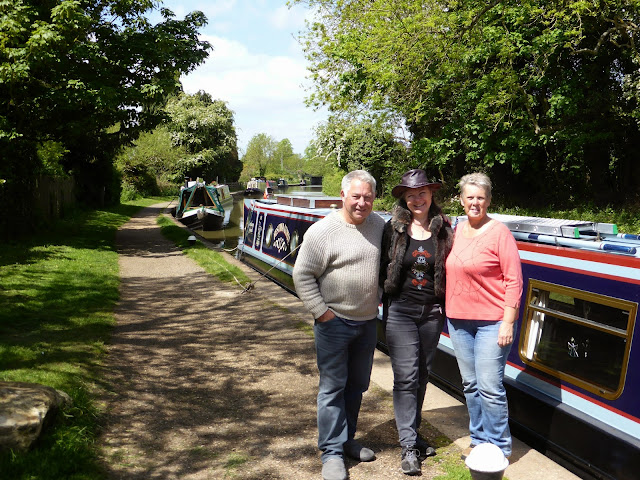 We left Braunston via the double locks, it's always nice to pair up with another boat to share the locks with. We shared with NB Dragonfly who have a crew of Kevin, Lorraine, their dog Molly and an eight foot Gnome!

Leaving the Admiral Nelson lock the two boats were being filmed by a BBC3 documentary crew which will be shown around August/September.

After the locks we enter Braunston tunnel, I remember our first encounter with  the tunnel here. Today we are veterans of a few transits, and progress is easy passing 5 boats without a micron of paint left behind even though one craft, instead of a tunnel light, had a car spot light which blinded us and left us with stars in our eyes for a few minutes. We moored at Welton Hythe and were joined by NB AreandAre. Our recently purchased bankside chairs had their first outing, beer, wine and tea were enjoyed as the sun's warmth faded, retiring aboard AreandAre to continue an enjoyable evening with Barry and Sandra.