Forecast was for a dry day up until 5pm when the rain would come in. So out with the paint and brushes and a coat of undercoat was applied to the primed stern area. The rain came early at 2pm but it was touch dry by then, I had run the engine to help warm the rear end to speed up drying time. Next decent weather window we get I'll give it another  undercoat followed by two top coats.

Enterprise picked us up from the marina at 5pm to take us to their depot in Stafford. We had a drive to B&Q , Argos and then did some shopping in Asda.  As it was getting late we decided to have a two course special at Frankie and Bennys. Pulled pork potato skins and crab meat bruschetta for starters which were really nice followed by a Ranch burger each which were OK.

Another grey day today with heavy low cloud so I won't get much done today on the exterior.... The sun did come out after lunch so I wet & dried the bow and gas locker lid while we waited for the joiner to turn up.. ...It's now 5pm and still no sign of the joiner, I'm getting a little bit cross now as we changed our weekend plans for his Saturday afternoon appointment with us.......  why can't tradesman turn up when they are supposed to. Sue spoke to Alex in the shop and he was very apologetic but I had rung the office and left  a message for him to call me earlier in the day and he didn't ring back. 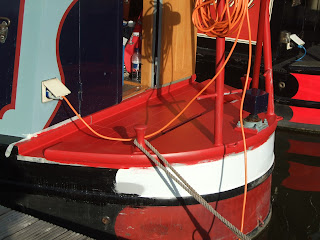 Undercoat on the stern counter 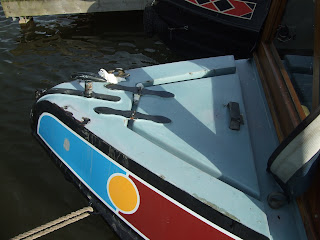 Tomorrow we are driving down south to go to the Leonard Cohen concert at the Dome (O2 Arena) on the way we will pick our tickets up from our friends who have invited us for Sunday lunch...thanks Christine.