Henley isn't a bad area to have an enforced overstay in, the park is large, plenty of families were enjoying picnic's in the sunshine even though the wind was crisp. The rowing clubs have been out in force practising for the regatta while joggers pound along the tow path with enthusiasm. The large Hobbs party boat with what looked like a wedding party aboard was cruising in the late evening.

This morning the lock keeper told us we would be able to move, the river is on yellow boards (stream decreasing) with only the reach between Temple and Marlow locks still on red boards. We planned to stop in Marlow which is upstream of the large weir so it wouldn't be a problem.

We got going before the park ranger came around for the £10 mooring fee... a bonus.


The sun was bouncing off Henley Bridge when we turned the boats to point down stream, using the centre arch we were on to the regatta course.


I have always liked cruising through the landscape from Temple Island to Hambleden Lock, I must have been admiring it so much I forgot to photograph it for you. A lock keeper was on hand to get us through the lock, the weir stream tried it's best to push FL into the bank, giving the prop the full 43Hp got us into calm water.

Topped the water tanks up at Hurley lock. Temple lock keeper made sure we understood the reach was still on red boards. We had a gentle cruise down to Marlow where we once more turned back up stream to moor on the visitor moorings, thankfully, we hadn't managed to find a mooring spot here the last six times we have passed this way.


Marlow is a busy vibrant small town, a wealthy area with lots of boutique's & artisan cafe's in the tidy high street. Landrover Bentley & Porche have plenty of customers from around here, a quick look in an estate agent shows there is more housing on sale in the £1,000,000 to £2,000,000 bracket than under £500,000.


A stop off at The Ship to watch the final laps of the F1 and sit in the garden afterwards. 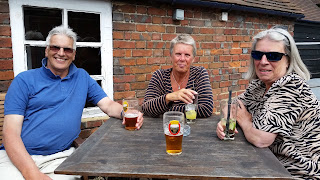