Can think of worse places to be marooned in. We had a walk around the town, Roly spotted a Wetherspoons and insisted we partook of the full English breakfast, so in we went. The rest of the day was taken up with holding the bankside chairs down.

Met an interesting fellow from Chicago, who has been living on his boat on the Thames for eight years, seems to be making a living odd jobbing on boats.

Tonight's teenaged revellers in the park were not as well behaved as last nights, lot's of shouting and profanities. This morning Sue picked up all the mess they had left behind which included drug taking paraphernalia.

We were allowed to continue our journey this morning even though nothing has been found yet. A bit overcast this morning but still warm as we took in the scenes and sounds to moor at Days Lock.

An afternoon stroll into and around Dorchester stopping at the George Hotel for refreshment where we met a couple of locals who have invited us to stay in their villa in France later this year. 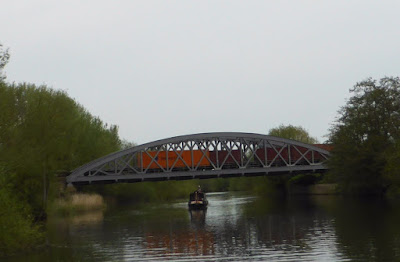