' Hello' - Joined together on the Grand Union canal

It took us three unhurried days to slowly make our way along the seven lockless miles to Napton to meet up with Roly and Bev for lunch at the Folly Inn, a bit of a diversion from our intended route north on the Grand Union 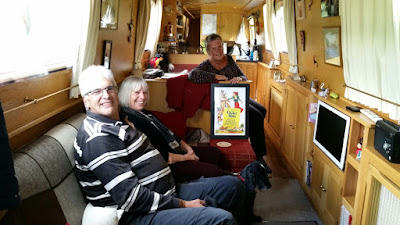 'Hello' - On our way back from the Napton shop we bumped into Phil, Lynn and Freddie haven't seen them since Stone  -  dinner in the pub was arranged and as they were going to Birmingham we could share the Grand Union double locks as far as Kingswood Junction where we would turn off on  Stratford on Avon canal.

Next morning we set of for the three Calcutt locks stopping for water just below them and stopping to moor for the night after. A two hour trip -  the bank side chairs came out and we continued where we had left off the night before with wine, ale and tea. 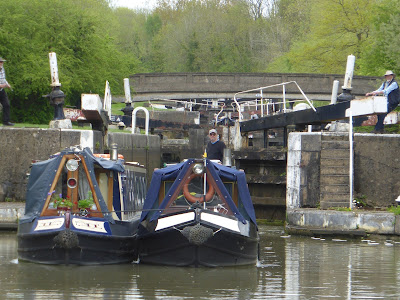 Today the two ships were roped together to descend the Stockton flight, this enabled an extra pair of hands with the lock wheeling, leaving a single helmsman to steer the boats between locks.

A short stop at The Two Boats, not for refreshment but to use the Co-op in Long Itchington 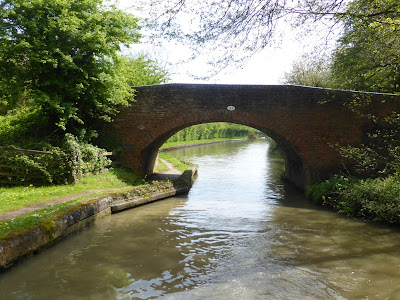 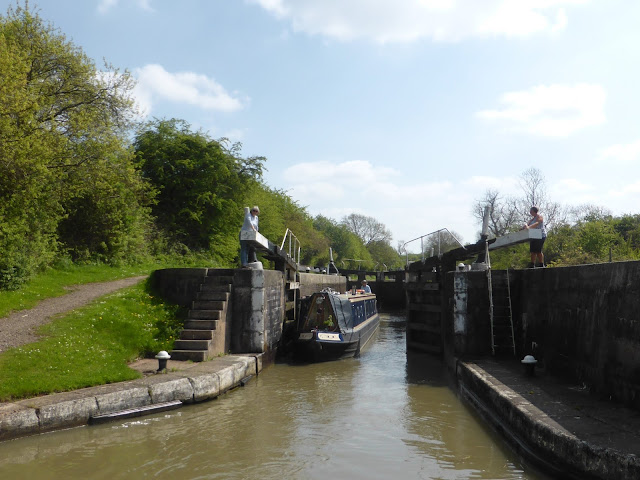 We stopped overnight adjacent to the Cape of Good Hope. Even though I had promised myself to drink only real ale's till next winter (being devoid of my tipple in Spain) I had an Estrella that was on tap.


Three hours from bottom to top ... we all agreed that it was a very enjoyable morning.

The following day the sun still shone as NB Valentine led the way through a very wet Shrewley tunnel, Sue did her best to protect the washing drying in the uncovered cratch from the leaking brick roof of the tunnel. Two miles later we pulled in on a high embankment overlooking some gorgeous countryside.

In the evening we all had a leisurely stroll to the Tom o' The Wood pub for a well deserved Doombar  or chardonnay and a lot of laughs.

Today it was time to say goodbye to our companions of the last week as they set sail northwest for Brumsville and we head south for Shakespeare town, both boats using the Stratford on Avon canal. We have had a joyful week with friends Phil & Lynn and would like to do it again soon, but as it is with this boating lark who knows when our paths will cross again.
Posted by Andy at 10:06

it was nice to travel with you yesterday, as you say, it's fun meeting other boaters.

We have posted our blog entry, FYI here- https://nbckoz.wordpress.com/