The new aerial doesn't work in Cropredy so we missed the daily 21:00 installment of the TT on ITV 4. I have noticed around us some boaters have their aerial's hoisted on 20 foot poles, I may have to get one of these.

The sun was out but it was a cool morning as we got rid of the dumpables at the Cropredy services and continued towards Banbury. Plan was to stop in Banbury to visit Debenhams, I required a new pair of strides as the 10 year old threads on my jeans have given way exposing a hairy knobbly knee, in some boutique shops you can pay top dollar for a pair of trousers with the odd gash, but I'm afraid mine have had it, it won't be long before other parts of my anatomy are bursting through the seams, best get a new pair and confine these as dumpable. I found a pair of designer olive coloured examples by John Rocha (is he a top designer) for £20 (perhaps he's not), they should make me look and feel a little greener.....also Sue made a purchase of an outfit to wear at a wedding later in the year.

As you enter Banbury you pass Sovereign Wharf on the offside which used to be a good place to fill the diesel tank with competitively priced fuel. The Wharf has now been sold and the new owners have stopped selling fuel. Some history around the canal here, Tom Rolt bridge and Tooleys boatyard mingle with the new shopping centre.

The watery road today was sometimes hot, sometimes cold, sometimes blustery sometimes all three in as many minutes. We are now moored at Kings Sutton in sight of the church spire, a herd of cows on the offside, farmland running down to the river Cherwell on the towpath side and the sound of traffic on the M40 in the distance!, just goes to show you can't have it all, all of the time. 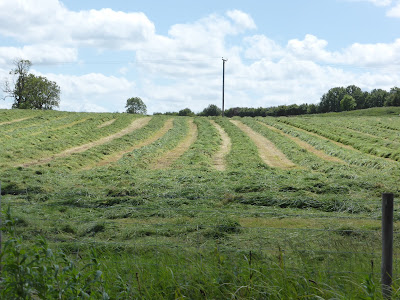