We spent the last week in Shepperton catching up with old friends, one of which Tracey, Sue hadn't seen for 21 years. We also managed a catch up with two of my brothers and a sister in law. Consequently we have been to the local pubs and restaurants most days, I am about to burst.

You may think two pints each is a bit greedy but we were given a complimentary pint of Timothy Taylors while we waited for the Doombar barrel to be changed and they both came up together. 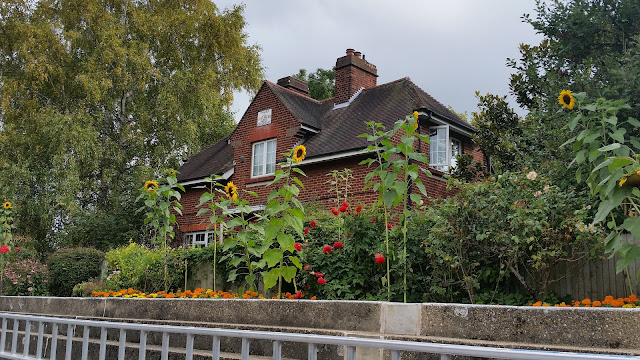 It was a good cruise hardly another boat moving on the water, we were the lone boat in each of the locks and Windsor moorings were devoid off boats when we arrived - the school hols must be over.


The Vetus dripless stern gland has been dripping!!

I first noticed it was dripping back in April a few drips a day, I should of replaced it while we had the boat out of the water for blacking in May but as it was such a minor incursion I left it. Even though I knew it could only get worse -  and so it did.

I put a container under the gland to monitor ingress, over the months it steadily got fuller, today after a four hour cruise to Windsor the one litre container was over flowing. So the job I was putting off till we got back on the canal (I was going to find a shallow spot just in case) could wait no longer.

Its not a difficult job to do but takes a bit of nerve and you have to work efficiently, after unscrewing the three allen bolts and removing the brass housing that holds the twin seals, the river Thames starts entering the bilge, not gushing in but more than a trickle -  before I started I greased an old rag and tied it around the prop end of the shaft in a failed attempt to hold back the flow - the cutlass bearing is raw water lubricated.

The shaft and the new seals were well greased before sliding in place, off course the thin gasket fell out of place at the first attempt at alignment, this was a bit frustrating with the background sound of running water, at the second go it all slipped back into place, the three allen bolts tightened up without cross threading and the sound of silence was calming to my internal panic button.

I backed the shaft up 5ml to get the seals onto an unworn part of the shaft before tightening the flange bolts up, filled the housing between the seals with silicone grease, then ran the engine in gear for awhile to test everything was ok.

Pumped out about a gallon of water from the bilge - job done.