Saturday - we set off from Thrupp in good sunshine for a short cruise to the old quarry moorings (now a nature reserve) near Kirtlington. There we met up with Linda & Richard and after a cuppa and a quick walk around the nature reserve for the men and Muffin we all set off again, we were on bit of a mission to get far enough up the canal that Sunday would be a short hop to Aynho where we were to have lunch at The Great Western with Paul & Elaine arriving by the Manly Ferry.

Ferndale headed the convoy finally finding a good mooring above Deep Cutting bridge. Chairs came out on the bank we had a lovely evening enjoying Sue's lamb ifit's stew.

Sunday -  a lazy start to the day, the six pins were pulled at 10:30. Paul, Elaine and the boys walked up from Aynho to meet up with the flotilla, at Somerton Bridge hole Elaine and Paul boarded FD & FL. Paul got his tiller fix by taking FL to Aynho which allowed me to help at the deep Somerton lock, where there was a  queue of boats forming to get through the lock which took over an hour to get through. 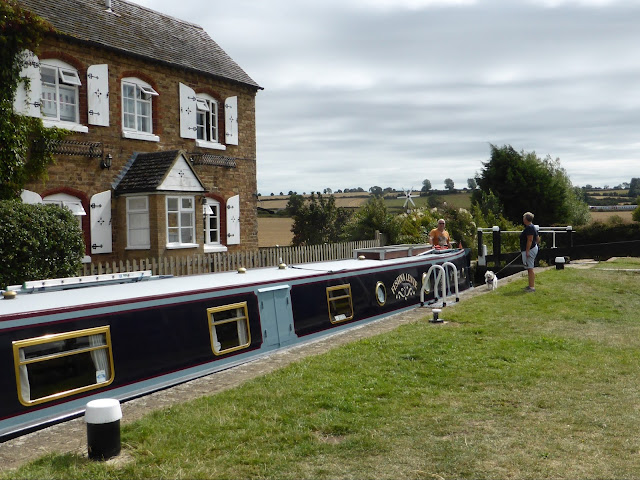 It was time for lunch when we reached Aynho - a table was arranged at the Great Western - the meal was first class - as usual the company was fantastic and laughter flowed along with the ale.


Afterwards we retired to The Manly Ferry which was moored canal side, for afternoon tea and biscuits with the odd beer and red wine. Here another Richard (NB Pendle Water) and boat dog Sadie visited with a tale of woe involving Banbury lift bridge & the cratch, before long Sadie dragged Richard away to finish the exercise she craved.... we heard later that all was fixed up at Aynho Wharf... relief for the skipper.


Monday - the three boats staggered their departure - we left about 09:30, stopped at The Manly Ferry Wharf for coffee & biscuits while the fuel & water tanks were topped up.  We said our farewells to Paul & Elaine who leave for more adventure's on the continent later this month where we hope to catch up with them in January.

On route we had a few showers, passed FD moored at Kings Sutton, we carried on as we needed to run a couple of errands and shop in Banbury. We continued afterwards to moor at Slat Mill lock a mile from Cropredy. We want to be up early and through the village as Fairport Convention are in town and the canal will be manic with moored craft.