Saturday-  It was a leisurely breakfast before readying the boats for a cruise to Godstow's Abbey moorings but before that a brief stop at Pinkhill to say hello to Ian & Irene turned into a fun three hour tea & chocolate biscuit session with the Freespirit crew.
After we said our goodbye's FD & FL set off for a five mile cruise that ended just in time to go to the Trout at Wolvercote, a well run bar & restaurant with good food, the extensive terrace area overlooking the weir stream was full of diners when we arrived. I enjoyed the Timothy Taylors and of course I had the pie (chicken,ham hock and mushroom). This was to be our last meal together with Ray & Diane this trip.

Sunday- we were up early to say goodbye to our Thames cruising companions, we have had a fun filled three weeks. It was too early for the lock keeper to be on duty, so Sue and I did the honours.


As usual we hadn't decided on which direction to go until we had breakfast, we turned FL around and headed back upstream for a few days. Chimney was going to be our destination but after getting through Kings lock we spotted a nice mooring at Hagley Pool, so the pins went back in at 09:30.

As there is no one here to disturb I got the wire brush and the orbital sander out to do some rust spots on the roof. I've decided to do a section at a time, it was gone 17:00 before the steel was cool enough to put a coat of primer on. 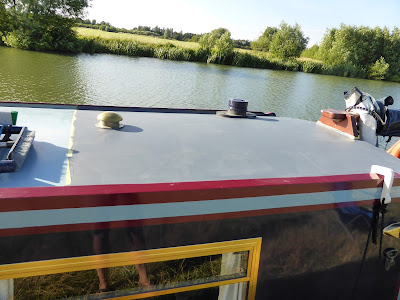