Marina life is very relaxed, but I do get jealous of those still on the canals still moving, at the moment the bow and stern fenders are on the roof until I get the weather to finish off the paint jobs I started before our USA trip.

We will do things a little different next year and stay cruising much longer, we are still learning. The darker evenings are here now, but in less than two months the days will slowly start to stretch out and then we won't have too long to wait before we are cruising again in 2014. 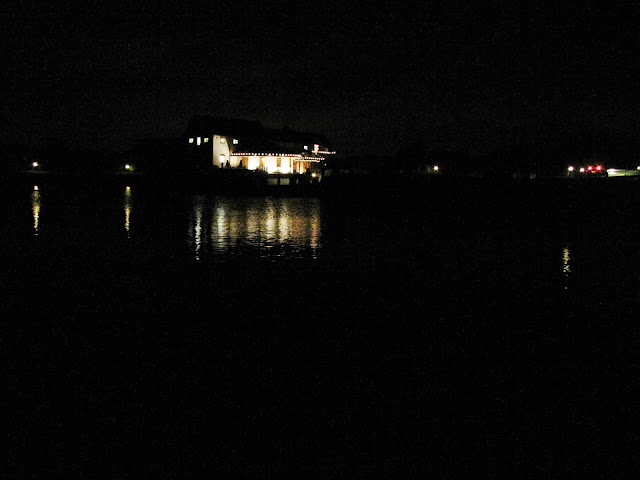 The Bistro, farm shop and management block viewed from FL (sorry I'm such a crap photographer)


Tuesday
Managed to get the first topcoat on the stern which doesn't look too bad, I rushed while keeping an eye on the worsening sky's. It will need a rub down and flatten before applying a second coat.

We returned the food processor to Curry's and bought a new hose from Homebase to replace our current holey hose which resembles Russel Square Fountain when we use it to fill the water tank, which wasn't a problem on the towpath but in the confines of the marina might upset the neighbours.

In the evening I lit the solid fuel stove, later I had to open the side hatch and windows to get rid of some of the heat!

My phone has been playing up for a while and I decided to do a factory reset, but unfortunately the phone wouldn't sync to the PC so I have had to manually type all my contacts into the phone, just hope I haven't missed any digits out.

Blue skies but cool. We took the car to have a look around Rugeley an old market town but today looks a bit run down, it does have a 'shopping centre' which has automatic doors at the entrance and if you walk very very slowly they will open before you walk into them. Once inside there are no Debenhams Boots of M&S, the space is divided into small square cells which offer the sort of goods you may find at the end of a jumble sale. After a walk around St Agustines  Church grounds we moved on to Litchfield birthplace to Dr. Johnson of literary fame, a smart university city with smart shops pubs and designer coffee cafes spread out among the alley's, antique shops museums and art galleries. We came home with a cosy for our tea pot!

Thursday
We had a trip out to Stoke on Trent and visited the Potteries Museum and Art Gallery,  they had a WW2 Spitfire on display as well as the expected ceramics pots plates and decorative items and natural history exhibits. The art was from LS Lowrey and a couple of other artists I have not heard of. Sue picked up a food processor from Debenhams and some earrings from Samuels. In the afternoon we made our way to Ashcoombe where the Camra web site had informed us there was to be a beer festival from Wednesday the 30th October with 280 beers to sample/choose from, they got it wrong we were a day early, these Camra guys ought to leave the ale alone while updating their site. I emailed their chairman to let them know how disappointed we were.
The Office for Natonal Statistics 'well being' report reads that the good people of Stoke are among the unhappiest people in the whole of the UK, I don't know why this is, but part of the reason could be the proliferation of speed cameras in this Shire. On the road  to Stoke there is a camera at least every half mile and on one stretch there were 5 or 6 within a half mile , Maurice Gatsonides family must be laughing all the way to the bank. I haven't seen any evidence that the dough these cash cows are coughing up are being used by the council for refurbishing the tarmac.

HI Andy, I love being in the Marina rather than on the cut in these cold and dark days, but like you, Barry is itching to be out again and wants to do it differently next year! We'll see …

We are enjoying the Marina to Sandra especially the hook up.People are very friendly and I cant keep Sue out of the farm shop. Glad we brought the car over though as it's handy for exploring this part of the country. Next year we will stay cruising until the beginning of December...maybe.

We were glad to see you reunited with Barry