Thursday
We left the Fradley mooring at 09:00, fleece's on to keep out the chill, the sun is out in a blue sky so all good. The landscape is rural for most of the route to Fazeley Junction. The Coventry canal inexplicable dissolves into the Birmingham & Fazeley canal the only evidence are the nameplates instead of numbers on the bridges.

A quick service stop at Peel's wharf to fill up the water tank and get rid of the dumpables before we are passing through Fazeley Junction where the B&F heads off south under Watling street bridge towards Birmingham, we are now back on the Coventry canal heading east through the two Glascote locks, two college students film our progress through the locks. The canal continues on a north easterly route past the suburbs of Tamworth before heading south under the M42 through Polesworth and back out into the countryside, where we moor behind Klara, Roly & Bev were out on the towpath, we joined them for an ale to celebrate the Queens 90th. 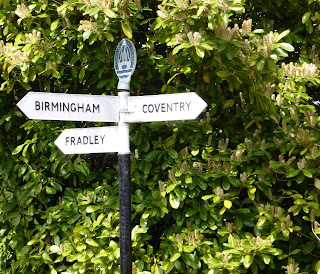