We are still hanging...

.... around in Staffordshire inverterless, but will start heading south for our annual Thames trip next week.

In between some pretty awful weather I have been busy with the paint brushes repainting the rear doors and counter. 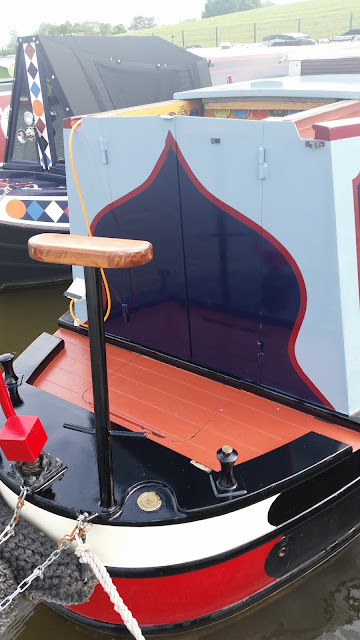 Another new marina will be coming on line, I welcome them as I hope they keep prices keen.

Not alot has been happening in our linear world... but in the real 'grown up's' world....

The unelected primeminister Mrs Might has finally been elected and has formed a government propped up by Paddy Power - this really is all going to get very messy. Now that the UVF/DUP is on board  negotiators could now have a strong bargaining tool (semtex) to get a good deal out of Angie Sauerkraut and chums.

BJ is waiting in the wings for another 2017 general election but the elephant in the cupboard he didn't want to be responsible for (Brexit negotiations) are still to be dealt with, he will most likely swerve that particular ball again, another credible incumbent will have to come to the fore or leave the door open for the opposing but seemingly honest pied piper Corbyn.

All this has taken the heat of Donald Duck as the world and Europe in particular now turn to laugh at the muddle the Tories have put the UK in.