Wednesday-We had a late start from Salt, it's fine Staffordshire countryside along here, the railway runs close to the canal from here to beyond Stone but does not effect this rural location one bit.

Aston Marina was the next port of call to get rid of the dumpables, there has been a new huge event building built on the site since the last time we were here, the facilities block for boaters is still in the same unfinished state as when we left.

We moved off after Sue went for a quick hello with friends Jim & Joan. Up Aston lock and a familiar cruise into Stone, we stopped for water before Star lock then reversed back to the winding hole and turned FL around and went in search of a mooring, the bank was full of boats and our 'can't walk far guest' wasn't happy when we moored half a mile from town. It took a bit of persuasion but she came with us to the post office to pick up a package from home, we had a sit down in Costa's before we returned to the boat.

Friday- its been 200 hours engine hours since FL had her oil and filters changed so I set about the task. Two hours later fresh oil was in the sump and all oil and fuel filters had been changed.

We walked Tuttsey back into Stone, we had to stop 5 times so she could catch her breath, here we met up with our mate Roly and his friend Graham in the Royal Exchange, Laurance and later Michelle welcomed us back into the fold...... 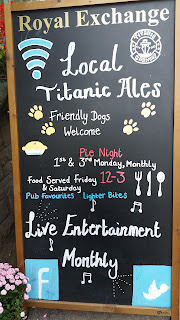 later we took Betty for a fish and chip supper in the local Wetherspoons. With a couple of glasses of wine consumed she was able to walk back to FL without the need to stop once!

Saturday after a stroll around Stone's monthly farmers market we met up for a proper catch up with Jim & Joan and  Bev & Roly in the Titanic pub.